America's leading low-cost silver producer Hecla Mining (NYSE:HL)picked the perfect quarter to deliver robust production growth. According to the company's preliminary third-quarter production report, its silver production jumped 67% while gold output increased by a 20% over the prior period. That surging production came right as the prices of both silver and gold were at their 2016 peak: 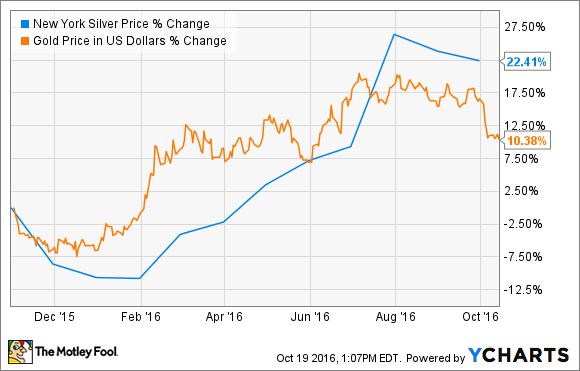 Clearly, that sets the company up to deliver strong third-quarter financial results when it reports them later this fall.

All four of the company's mines contributed to this increasing output. For example, silver production at Greens Creek jumped 23% thanks to higher ore grades. Likewise, silver output from Lucky Friday surged 50% due to higher grades as well as the fact that ventilation repairs negatively impacted output in last year's third quarter. Meanwhile, gold production at Casa Berardi increased by 9% due to higher mill output as a result of the addition of surface production from the East Mine Crown Pillar pit. Finally, the addition of the San Sebastian mine to its portfolio added production that it did not have in the prior period.

Hecla Mining was one of a handful of producers reporting robust preliminary third-quarter production. In fact, many of those same factors drove the strong production growth at rival First Majestic Silver (NYSE:AG), which reported record silver production in the third quarter. First Majestic Silver, for example, noted that higher silver grades, throughput rates, and recoveries pushed its silver equivalent production up 27% to 4.5 million ounces.

As a result of the combination of expanding production and prices, Hecla Mining also reported a $33 million increase in cash and short-term investments on its balance sheet, which boosted that total to $192 million. However, $16 million of that amount was insurance proceeds from the Troy Mine reclamation. Still, it implies that the company generated $17 million in free cash flow during the quarter. While that is a bit less than the $25 million in cash the company added last quarter, that could be due to the timing of capex or other factors that Hecla will not detail until it releases its third-quarter results.

That said, Hecla Mining's growing cash position is worth noting given what its rivals are doing with theirs these days. First Majestic Silver, for example, noted last quarter that its cash and equivalents rose by $46.5 million to $108.2 million, partially due to an equity issuance in the quarter. That said, the company put a portion of that cash to immediate use by increasing its capex budget by $20.9 million, which it will use to expand its development and exploration programs.

These maneuvers by rivals seem to signal an increasing openness by the mining companies to spend on growth. As such, it certainly raises the question of what Hecla Mining might do with its growing war chest given that it continues to generate gobs of free cash flow. The company has several options including accelerating capex spending, making an acquisition, or updating its dividend policy to increase its meager dividend.

Hecla Mining's silver production is surging at just the right time, which is enabling it to generate a lot of cash flow. With that cash starting to pile up on the balance sheet, it gives the company more options to either create future value for investors or reward them with a growing income stream. Needless to say, the company is in a solid position right now.