Kinder Morgan's (NYSE:KMI) third-quarter results reiterated something the company has been trying to hammer home for years: Its business model is very resilient. That is evident by looking at its distributable cash flow, which came in at $1.081 billion for the quarter, down just 4.3% from last year's third quarter despite significant volatility in commodity prices. Overall, the company's results were right in line with its expectations. 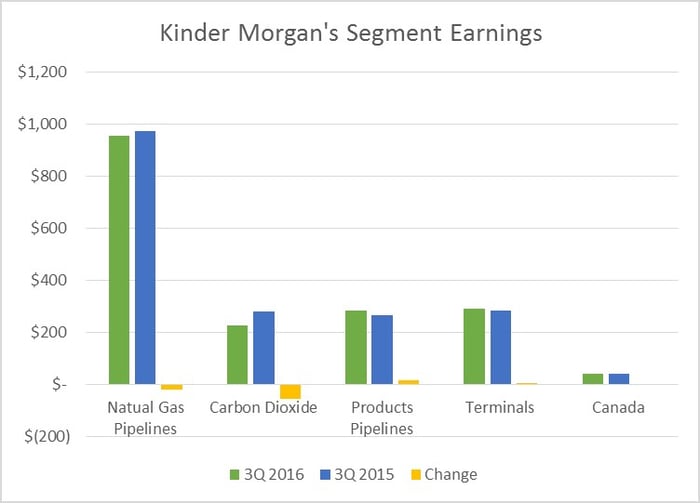 As Kean notes, the company's primarily fee-based asset base continues to pump out steady cash flow. During the quarter, the company produced more than enough cash to cover its dividend with room to spare.

The second takeaway comes from founder Richard Kinder, who noted:

During the quarter, we substantially reduced our debt, further positioning Kinder Morgan for long-term value creation. We are ahead of our plan for 2016 year-end leverage and we're pleased with the progress toward reaching our targeted leverage level of around 5.0 times net debt-to-adjusted-EBITDA. ... This will position us to return substantial value to shareholders through some combination of dividend increases, share repurchases, additional attractive growth projects or further debt reduction.

As Kinder points out, the company made excellent progress on its debt reduction plan. The primary driver of that was its strategic transaction with Southern Company, which not only offloaded debt to the utility but brought in cash that Kinder Morgan used to redeem debt. As a result, that deal pushed the company's leverage down to 5.3 times, which is well ahead of its year-end goal to get that key metric down to 5.5 times. That said, the company's target is to get that number down to 5.0 times before it ramps up shareholder distributions, which means it has more work to do.