Saudi Arabia's energy minister recently warned that there could be a global oil supply shortfall in the coming years, which could push crude prices much higher. Driving this view is the expectation that production from legacy wells will decline by a significant amount over the next few years and that there is not enough production in the pipeline from megaprojects to offset these declines. It is a view shared by others in OPEC, with its former secretary general also warning about a potential future crude shortage and price spike.

That said, ExxonMobil (NYSE:XOM) CEO Rex Tillerson thinks this view is incorrect. In his opinion, the Saudis are missing the fact that shale drilling has dramatically changed the landscape. Drillers have gotten very adept at getting more oil out of tight rocks at ever lower prices. Because of that, he believes that shale producers can quickly ramp up output to fill any gap between supply and demand. In effect, North America can become the new swing producer in the oil market, which is a role that the Saudis used to occupy.

Drilling down into the Saudis' concerns

The Saudi view is simple. Global oil production is heading lower because there is not enough new production coming online to offset declining and depleting production from legacy wells. According to oil reservoir specialist Core Lab (NYSE:CLB), the net worldwide annual crude oil production decline rate is 3.3%. In fact, in Core Lab's view, the natural production decline rate alone should take care of the oil market's current glut by the end of this year and create a much tighter oil market going forward. Meanwhile, global oil demand is expected to continue growing by 1.2 million barrels per year, or about 1% annually, according to the International Energy Agency.

If these two trends continue, it will not be long before there's an ever-widening gap between production and demand. That is because the industry has shelved 46 major projects representing $200 billion of investment and 20 billion barrels of oil equivalent supply since the onset of the downturn, according to energy analysts at Wood Mackenzie. For example, leading Canadian oil sands producer Suncor Energy (NYSE:SU) deferred two major projects in 2015 that would have added supply starting in 2018. Suncor Energy initially expected to start construction on its Mackay River 2 oil sands development and White Rose offshore expansion in 2015, but it deferred both projects to cut costs amid the oil market downturn. Suncor has yet to reinstate either project, meaning that the 28,000 to 33,000 barrels per day that they were expected to add to the oil market will not come online for several years after Suncor gives them the green light, as a result of their long lead times. With a growing number of megaprojects like these currently on ice, it is easy to see why the Saudis are concerned about global supplies later this decade.

A new king emerges in the oil patch

That said, what the Saudis aren't figuring into the equation is the resilience of shale producers. That oversight is nothing new, given that OPEC's policy to win back market share failed because shale producers have proven to be much more resilient than anticipated during the downturn. In Tillerson's view, the best is yet to come.

That is why he rebutted the Saudi view:

I don't quite share the same view that others have that we are somehow on the edge of a precipice. I think because we have confirmed viability of very large resource base in North America ... that serves as enormous spare capacity in the system. ... It doesn't take megaproject dollars and it can be brought on line much more quickly than a three to four year project.

Those sentiments are clearly playing out in the recent growth forecasts of leading shale drillers. For example, EOG Resources (NYSE:EOG) stated that it could grow its oil output by 10% annually through 2020 at a flat $50 oil price, with that growth rate accelerating to 20% annually at $60 oil. Driving that acceleration is the fact that EOG Resources' drilling returns rocket higher on just a meager increase in oil prices: 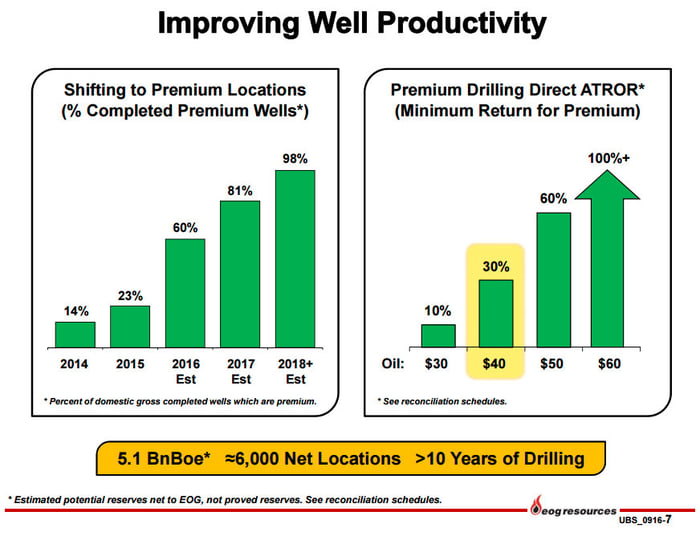 It is a similar story at Encana (NYSE:OVV) and Pioneer Natural Resources (NYSE:PXD). In Encana's case, it is now in the position to deliver 60% liquids production growth through 2021 at just a flat $55 oil price. Meanwhile, Pioneer Natural Resources is on a trajectory to achieve 15% compound annual production growth through 2020 at an average oil price of $55 per barrel. However, like EOG Resources, both companies could quickly accelerate their growth rates at higher oil prices. That is because these companies have an extensive supply of low-cost drilling locations. In Encana's case, its current five-year plan would only consume about a quarter of its premium well inventory, which only represents half of its total drilling locations. EOG Resources, likewise, has an extensive inventory of future drilling sites that it can develop, should the market need more oil in a hurry.

Saudi Arabia believes that the oil market could go from glut to shortfall in just a few short years. However, ExxonMobil's CEO thinks that it is making another fatal mistake by discounting the potential of shale producers to unleash a torrent of additional production if oil prices run higher. Because of that, the Saudis should not bank on a future super spike in the oil price to bail out their current fiscal troubles, given that any surge in the price of oil would likely meet a flood of new supply from American producers.