According to the latest economic data, average household income is down 2.4% from its peak in 1999. That implies that most Americans have not gotten a real raise in years. That said, while employers are stingy to their employees, companies are pretty generous to their investors. In fact, the following three companies are likely to double the income streams they pay investors over the next few years.

A pipeline of income growth

One of the reasons why refining giant Phillips 66 (NYSE:PSX) launched its midstream MLP Phillips 66 Partners (NYSE:PSXP) was to give investors an opportunity to collect a rapidly growing cash flow stream. That is why, when the MLP went public in late 2013, it stated that its goal was to deliver a 30% compound average annual increase in distributions to investors through 2018. As the following slide shows, the company has done just that over the past few years: 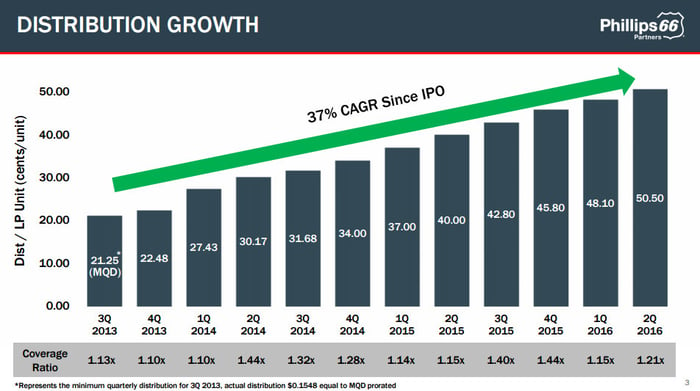 If the company maintains its current pace, it could pay out as much as $0.90 per unit on a quarterly basis by the end of 2018. That's almost twice the $0.531 per unit it currently distributes. Even if we assume that distribution growth slows considerably to, say, 10% annually after that, Phillips 66 Partners could double its current quarterly rate by 2020.

Driving the company's ability to grow the payout at such a robust clip are drop-down transactions with parent company Phillips 66. In fact, the two companies recently announced their largest deal to date, a $1.3 billion drop down of pipeline and terminal assets. Not only does the refining giant still own several midstream assets such as these to drop down to its MLP, but the partnership has several organic growth projects under development, and can make third-party acquisitions to fill the gaps. Needless to say, it has ample capacity to give investors healthy raises for the foreseeable future.

Getting closer to ratcheting up the payout

Natural gas pipeline giant Kinder Morgan's (NYSE:KMI) initial aim upon consolidating its MLPs was quite similar, with it planning to grow its dividend by 10% per year through 2020. However, the recent oil market downturn, when combined with its elevated leverage, forced the company to make the difficult choice to slash its payout by 75%. That said, its decision to do so gives new investors the opportunity to capture quite a big raise in the coming years.

The company's primary aim right now is to get its debt down to 5.0 times earnings before interest, taxes, depreciation, and amortization (EBITDA) before it reconsiders dividend increases. It has made steady progress on that goal over the past year, with excess cash flow and several strategic transactions pushing that key metric to 5.3 times.

According to an analysis by Credit Suisse, Kinder Morgan is on pace to hit its leverage target by the second quarter of 2018, assuming there are no additional strategic transactions in the pipeline. Under that assumption, the company could double its quarterly dividend to $0.25 per share in the third quarter of that year before growing at a tamer rate in future years. In other words, new investors might only need to wait two years before getting a massive raise.

Providing support before the big payday

Williams Companies (NYSE:WMB) is another energy infrastructure company that recently cut deeply into its dividend due to the energy market downturn. However, unlike Kinder Morgan, Williams reduced its payout for the sole purpose of supporting the growth of its MLP Williams Partners (NYSE: WPZ).

Williams has always viewed its decision to decrease the dividend as a temporary one. Its aim is to get Williams Partners through its current growth phase so that both companies can boost their investor payouts in 2018.

While Williams has yet to put out its 2018 dividend target, analysts at BMO Capital Markets think that it can rebase its dividend by 150% in 2018. Further, their view is that the company can then grow its payout by at least 5% annually after that while supporting a healthy coverage ratio. Again, investors buying today can collect a decent dividend for the next two years as they await a potentially gigantic raise in 2018.

Investors looking for a big raise in the future have several options. Those seeking a steadily rising cash flow stream should take a look at Phillips 66 Partners, which should deliver robust annual income growth and potentially double its payout by 2020. Meanwhile, those looking for a mammoth raise in the near term should consider either Kinder Morgan or Williams Companies, both of which could double their payouts in 2018.