Shares of FormFactor (NASDAQ:FORM), a semiconductor probe card manufacturer, have fallen by as much as 12% in early morning trading on Friday in response to its third-quarter earnings results.

The headline numbers from FormFactor's third quarter looked great. Revenue jumped by 87% to $123.3 million while non-GAAP EPS skyrocketed 267% to $0.22, both of which came in ahead of Wall Street's expectations. The enormous revenue and profit jump was directly attributable to the company's recently completed $352 million acquisition of Cascade Microtech, one of its former competitors.

There were other bright spots in the report, too. Probe card segment revenues -- which includes foundry and logic (formerly called SoC), DRAM, and flash -- grew 24% sequentially. Non-GAAP gross margins came in at the high-end of management's guidance range, and the company said that it already achieved cost synergies from the deal of roughly $5 million.

However, traders appear to be reacting primarily to the company's fourth-quarter guidance. Management stated that sales in the company's probe card segment will decline slightly, which is why they are forecasting that total company revenue will land between $116 million and $124 million. On the bottom line, non-GAAP EPS is expected to come in between $0.15 to $0.21.

While Wall Street's expectation of $122.2 million in the fourth quarter is within management's guidance range, the pros were expecting $0.22 on the bottom line. Given the shortfall, shares are tumbling.

While the downbeat profit range might initially give you pause, management noted on its conference call with investors that the fiscal fourth quarter will include an extra week this year. As a result, management believes that it could see up to $2.4 million in incremental expenses with almost no benefits to revenue. This appears to be a major reason why the company's EPS projection is not as robust as analyst's had projected.

Aside from the timing issue causing the temporary hit to next quarter's profits, FormFactor's results suggest that it is already seeing big financial benefits from the acquisition. Investors also appear to be growing more confident in the deal. Over the last six months FormFactor's stock has vastly outperformed the Technology Select Sector SPDR ETF (NYSEMKT:XLK), so perhaps a sell-off on the near-term profit outlook shouldn't come as too much of a surprise. 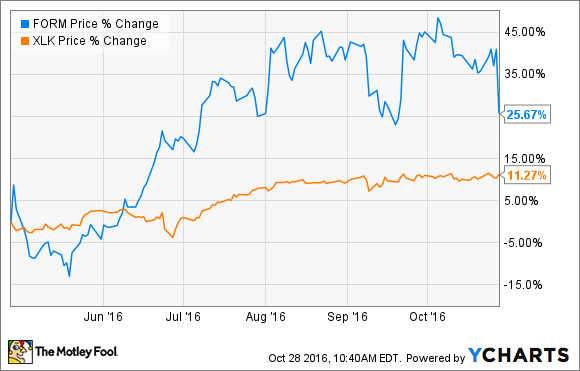 The only thing that matters from here is how well the company can execute against its plans to meaningfully grow revenue and profits over the long term. As long as management can continue to deliver on its promises, I suspect that long-term shareholders are likely to make out just fine from here.