Intel (NASDAQ:INTC) and Micron Technology (NASDAQ:MU) have a lot in common, and a long history of working together. Personally, I own both stocks. But if you had to choose one of these chip stocks to buy today, which one would it be?

Let's get this out of the way right at the beginning.

Intel is a far larger and more diverse business than Micron. This shows in many ways, including the stock charts. If you are a growth-thirsty thrill seeker, one look at this chart will tell you that Micron is right up your alley in ways that Intel just isn't. On the other hand, risk-averse value hunters will reach exactly the opposite conclusion: 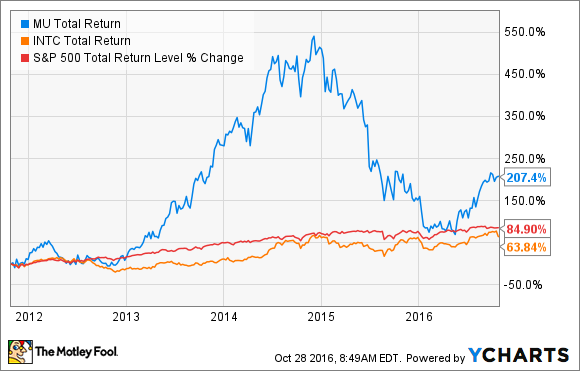 And if that wasn't obvious enough, these fundamental financial differences between Micron and Intel just might tip your scales:

It really doesn't matter how you slice it. Intel always comes out as the more stable and reliable choice in this contest. The company's credit rating is comparable to that of major banks, and better than those of some European countries. But a bank or a country with Micron's risky credit rating is standing with one leg in all-out bankruptcy already.

Micron is neither a bank nor a country, though -- plenty of respectable businesses get by just fine with speculative-grade credit ratings. But interest rates will be higher when they take out loans, and these ratings are a good indication of business risk. In a nutshell, Intel is a low-risk investment, while Micron investors must accept a higher level of financial risk.

If all signs point in favor of Intel, why would anybody want to own Micron instead?

Micron's chosen trade is extremely cyclical. Sure, Intel's order volume moves up and down with the economy, with the short-term popularity of PC systems, with the global need for big-iron enterprise servers, and many other factors. But none of these market-moving factors can hold a candle to the drastic ups and downs of the computer memory market.

In short, Micron is subject to all of the same product demand drivers that affect Intel -- plus regularly occurring price wars that have nothing to do with end-user demand.

When memory market leaders Samsung (NASDAQOTH: SSNLF), Hynix, and Micron get along, street prices for memory chips can hold steady for years at a time. In these times of prosperity, Micron's sales and profits skyrocket. The stock generally follows suit.

That's what happened in 2012-2014. At the time, Micron had a a newfound pricing power thanks to the recently completed buyout of bankrupt rival Elpida, and the company used this power to full effect. Holding back on production volumes, Micron shifted the global supply-and-demand equation significantly, and memory prices stabilized in a big way: 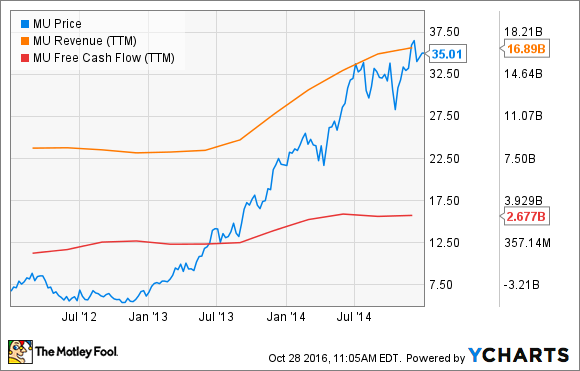 Right now, Micron is knee-deep in yet another price war. Samsung is putting the production pedal to the metal, not terribly worried about the effect this market-flooding action is having on memory prices. The Korean giant can afford to take some losses in an attempt to increase its market share, because memory chips are just a small part of a much larger technology conglomerate.

Micron doesn't have that luxury to the same degree, as any change in memory prices shows up immediately on the bottom line. That effect has killed plenty of vulnerable memory producers over the years. This is the largest risk, and it weighs heavily on Micron's credit ratings and financial future.

As cyclical markets go, this downturn shall eventually pass. One of these days, Samsung will have reached its internal market share goals and shifted into profit-taking mode. Production volumes go down, memory prices stabilize again, and the survivors of the last shakeout get to share another bonanza.

Buying Micron today is a bet on this company making it to that next party date. That's a bet I'm perfectly willing to make, thanks to Micron's robust cash balance and solid cash flows even in the face of Samsung's worst market floods.

Intel and Micron play very different roles, but are both very welcome parts of my investment portfolio. Micron's next upturn will come, and Intel will continue to chug along like the unstoppable juggernaut it is.

If you're on the sidelines of both stocks today, one of these investments will be a much better fit for your investment strategy than the other. Choose accordingly. But for long-term omnivores like yours truly, there are no bad choices here.