Let's take a closer look at the new Microsoft systems that NVIDIA is powering, what NVIDIA chips are inside these machines, and what this win could potentially mean for the graphics specialist.

On Oct. 26, Microsoft announced an updated version of its Surface Book laptop. The first-generation Surface Book used what AnandTech said was approximately equivalent to a GeForce GT 940M.

The GeForce GT 940M wasn't a graphics processor that could handle serious gaming, though it is generally believed to be a marked step up from the graphics that comes integrated in the main processor.

Microsoft's second-gen Surface Book, on the other hand, includes a graphics processor known as the GeForce GTX 965M. This isn't based on NVIDIA's new, more efficient Pascal architecture but is instead based on the company's older Maxwell architecture.

Nevertheless, the 965M is a credible gaming-capable graphics processor that should dramatically improve the gaming experience in the new Surface Book relative to the first-generation model. Microsoft is likely paying significantly more for the 965M than it did for the 940M-class part in the prior model.

Microsoft also released a new all-in-one computer that it calls the Surface Studio. This is a high-end all-in-one system, and as such also uses stand-alone graphics rather than integrated processor graphics.

For the highest-end variants of the Surface Studio, Microsoft is including a GeForce GTX 980M. The lower-end versions will get the GeForce GTX 965M -- the same chip that powers the new Surface Book.

A render of the GeForce GTX 980M. Image source: NVIDIA.

All told, NVIDIA should generate a healthy amount of revenue and gross profit dollars from each of the Surface Studio systems that get sold.

What does this mean for NVIDIA stock?

The good news for NVIDIA is that it should now make more money from each second-generation Surface Book sold compared to the first-generation models. However, the Surface Book isn't likely to be a particularly high-volume seller, so investors shouldn't count on the windfall from this design to be all that huge.

However, just as with the Surface Book, it doesn't seem likely that the Surface Studio is going to sell in particularly high volumes.

As far as the impact to NVIDIA's business and, ultimately, stock goes, I'd say that this is a nice win, and NVIDIA should enjoy some amount of revenue growth in its gaming-capable graphics processor sales from the wins. 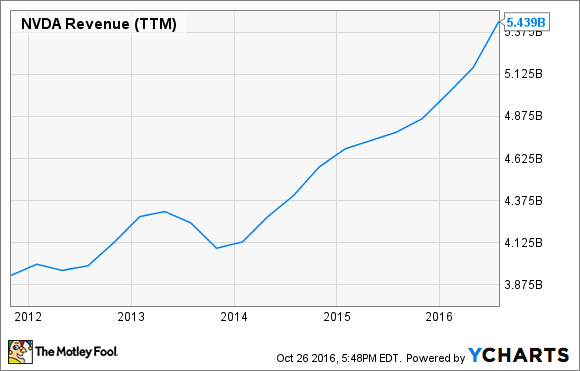 Much of NVIDIA's revenue growth has been driven by sales of gaming processors. NVDA Revenue (TTM) data by YCharts

However, considering how large NVIDIA's gaming graphics processor business is, and given that much of the company's revenue here comes from sales of graphics processors to gamers, both directly and built-in to gaming-oriented systems, it probably won't move the needle enough to meaningfully affect revenue, earnings, or the company's stock price.