Shares of International Business Machines (NYSE:IBM) haven't fared well over the past few years. Revenue and earnings have been in a prolonged slump as IBM aims to transform itself, and the market hasn't shown much patience. The stock is down about 17% from its peak in 2013.

Despite the poor performance of the stock, IBM is still a great company worth buying and holding for the long run. Here are 10 reasons to buy IBM and never sell.

1. A long track record of adaptation

Founded over a century ago, IBM originally manufactured and sold products such as commercial scales, cheese slicers, and tabulators. Recognizing that its lucrative mechanical tabulating equipment would soon be no match for computers, IBM invested heavily to build its first mainframe system in 1964. IBM sells mainframes to this day.

In the early 1990s, the company was forced to transform itself once again, after its business nearly collapsed. The software and services model was adopted, and IBM grew into a global powerhouse offering integrated solutions. Today, IBM is undergoing yet another transformation, this time to a cloud and cognitive-computing company. The changes have been painful, but IBM's history of reinventing itself is a good reason to believe that the company can succeed.

IBM has never been shy about getting rid of businesses that no longer provide adequate returns. The company was once the leading seller of PCs, but it sold its PC business to Lenovo in 2004. This move reduced revenue, but the revenue was extremely low margin. Jumping ahead to today, with the PC market in a prolonged slump, IBM's move away from PCs looks prescient.

In 2014, IBM sold its x86 server business, also to Lenovo. This move also reduced IBM's revenue, but the company recognized that it could gain no advantage selling hardware consisting of commodity parts. IBM has been shifting toward higher-value products and services for years, and its constant optimization of its portfolio of businesses is a trait few companies can match.

3. A sticky customer base

The list of IBM clients is impressive. According to IBM's 2015 investor briefing, 90 of the top 100 global banks, nine of the top 10 oil and gas companies, 92 of the top 100 healthcare organizations, and 80% of the top 50 retailers rely on IBM solutions. This broad customer base gives IBM the ability to maintain impressive profitability even as it completely transforms its business. 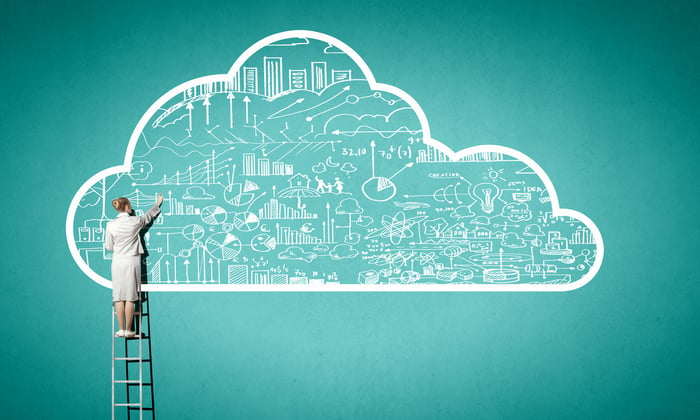 IBM is far from the largest cloud infrastructure provider, and it will probably never be as big as Amazon.com's AWS or Microsoft's Azure. But IBM's cloud strategy is to offer high-value, differentiated solutions, such as analytics and security. The business of renting commodity computing resources, while an important part of IBM's cloud business, is not the main focus.

IBM has largely avoided the kinds of large, transformative acquisitions tech giants make that rarely turn out well. Instead, IBM generally buys up smaller companies to build out its product offerings. Between 2011 and 2015, IBM spent $13 billion on acquisitions, along with $48 billion on research and development and capital expenditures.

Recent acquisitions include Promontory Financial Group, a financial consulting firm; EZSource, an application discovery company; and Bluewolf Group, a cloud consulting provider. None of these acquisitions is a game changer on its own, but they collectively represent IBM's attempt to broaden its portfolio and capabilities. IBM's ability to avoid making disastrous acquisitions as many of its peers have is a real asset.

The face of IBM's transformation is Watson, the company's cognitive-computing system. Watson is expected to eventually become a major business, and IBM has been entering partnerships for the past few years in an effort to push Watson into a broad array of industries. The company expects 1 billion people to use Watson in some form by the end of next year, a milestone that suggests that Watson is gaining traction.

Last year, General Motors announced that it will use Watson in a new version of its OnStar system to provide personalized offers. The recently acquired Promontory Financial Group will also use Watson to help clients reduce spending on compliance. Slack, an enterprise messaging start-up, plans to use Watson to improve its customer-service bot. The list goes on and on. Watson may not yet contribute much revenue for IBM, but the future looks bright.

One area where Watson is actively being used is the healthcare industry. Through various partnerships with healthcare organizations, Watson is helping doctors provide better diagnoses and treatment options. The system can churn through an immense amount of data, including medical records, journal articles, and books, giving doctors the information they need to make better decisions.

Last year, IBM and Quest Diagnostics expanded a partnership that will see Watson more broadly available to consume genomic information from tissue samples and provide better treatments for cancer patients. The global healthcare industry is immense, and IBM's aggressive push to apply Watson to a broad set of healthcare problems could pay dividends down the road.

Intel currently dominates the market for server chips, enjoying a near monopoly and abundant profit margins. IBM, through the OpenPOWER foundation, aims to chip away at Intel's lead by teaming with a broad set of companies to build an ecosystem around its Power chips. The OpenPOWER foundation includes giants such as Alphabet's Google, NVIDIA, Micron, and Samsung, as well as more than 100 other member companies.

The process of reclaiming meaningful market share from Intel has been slow, but some good news emerged last year. Google is developing an open server architecture based on IBM's upcoming POWER9 processors, a move that could see the company, as well as other cloud computing providers, move away from being 100% Intel. That's good news for IBM's Power business.

IBM's payout ratio, based on 2016 non-GAAP EPS, is just 41%, meaning that the company has room to grow the dividend faster than it grows earnings. Expecting continued high-single-digit dividend growth going forward seems realistic, and it makes IBM a stock to buy and hold.

IBM expects to produce $13.80 in per-share adjusted earnings in 2017, up from $13.59 in 2016, which puts the P/E ratio at about 13. The company's transformation is making meaningful progress, with strategic imperatives now accounting for 41% of revenue and still growing at a double-digit rate.

The market is pricing IBM at a pessimistic valuation, with the assumption that the company won't be able to return to robust earnings growth. Given IBM's history and guidance for a return to earnings growth this year, I wouldn't underestimate Big Blue.