Midstream giant Williams Companies (NYSE:WMB) and its master limited partnership, Williams Partners (NYSE: WPZ), released their third-quarter results before the market opened on Monday. Overall, the numbers were pretty good with most key metrics heading in the right direction. Three numbers, in particular, stood out.

Earnings are on the rise

Williams Companies recorded a solid 8% year over year increase in its adjusted EBITDA, which rose to $1.192 billion. Fueling nearly all of those earnings and the bulk of that growth was the company's MLP, which reported $1.189 billion in adjusted EBITDA. Contributing to the incremental difference at Williams Companies was $16 million in other income, which partially offset a $13 million loss at its NGL and petchem business.

Given that the bulk of Williams' earnings are from Williams Partners, that is where we will focus our attention. As the following chart shows, its earnings were strong across the board: 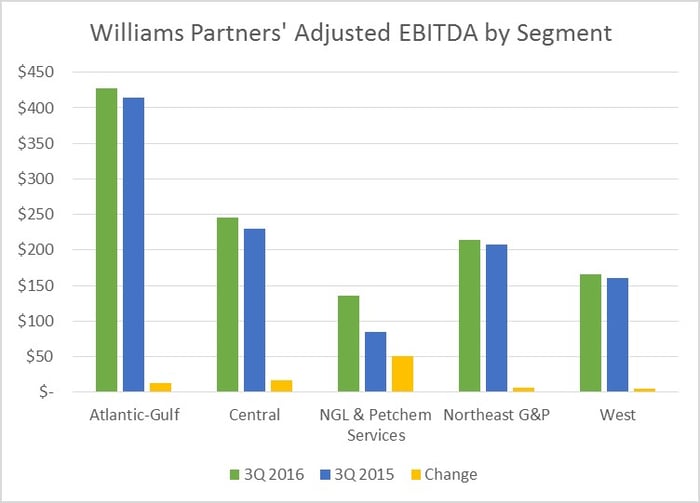 The partnership's NGL and petchem services' segment was the leading driver of results this quarter, with earnings up sharply on stronger olefin margins and higher fee-based revenue. Meanwhile, profits in the central segment improved due to lower expenses. Finally, higher fee-based earnings from new assets going into service improved the results of the Atlantic-Gulf and Northeast G&P segments.

Geismar is getting better at the right time

As mentioned, Williams Partners' NGL and petchem services segment's growth led the way this quarter thanks in part to an increase in olefin margins at the company's Geismar plant. Overall, Geismar's earnings were up $33 million from the year-ago quarter on stronger production and improved pricing. That improvement is noteworthy because Geismar's performance is rebounding at just the right time given that the company is exploring strategic options for the facility.

In prior quarters, Geismar had weighed down results due to unfavorable olefin margins and uneven production. However, with commodity prices turning around, earnings at the facility are on the upswing as well. That improvement will likely provide the company with more leverage in negotiations as it looks to monetize its stake in the entity. As a result, the company could net a higher sales prices or secure a more lucrative tolling agreement than it would have if Geismar's results had not improved.

The rise in Williams Partners' underlying earnings provided both companies with higher cash flow to support their shareholder payouts. In Williams' case, its cash flow available for dividends rose 0.5%, going from $439 million to $441 million. That growth underperformed the increase in adjusted EBITDA due in part to a 6.8% increase in corporate interest payments. Meanwhile, the company delivered robust dividend coverage during the quarter of 2.94 times -- mainly because of its decision to cut the payout to support its MLP -- up from 0.91 times in the third quarter of last year.

Williams Partners' distributable cash flow also increased, rising 5% to $795 million. Slightly weighing on distributable cash flow growth was a 12% uptick in interest expenses. Overall, the improvement in cash flow when combined with its decision to hold its distribution steady, pushed the distribution coverage ratio up to 1.08 times, which is up from 1.04 times in the year-ago quarter. This rising coverage ratio allowed the company to generate additional excess cash flow to fund a portion of its growth capex.

Williams Companies, thanks to its MLP, turned in a solid quarter, with earnings, cash flow, and coverage all going up. Furthermore, the continued strength at Geismar gives Williams Partners a much stronger bargaining point as it continues to review its options for that business. These across-the-board improvements mean that Williams continues to head in the right direction.