I'm on record as being a huge fan of Apple's (NASDAQ:AAPL) capital return program. Not only is the program highly accretive to earnings due to its sheer size, but it also improves certain performance metrics such as return on assets (ROA) and return on equity (ROE) by reducing the denominators in those equations. Prior to the program's implementation, Apple truly had accumulated far too much cash on the balance sheet that was doing absolutely nothing, and CEO Tim Cook finally addressed long-standing criticisms around capital efficiency by starting to give it back to shareholders.

But at the same time, you also don't want to give too much back. Apple has found the right balance on how much capital to return.

Free cash flow is already an important metric for investors to watch, particularly any company that has meaningful manufacturing operations. Even if the labor is outsourced to contract manufacturers, like it is in Apple's case, the company still has to spend heavily on infrastructure and tooling equipment. To determine the cash that Apple pays for capital expenditures, you add up two line items on the cash flow statement: payments for property, plant, and equipment (PP&E) and payments for intangible assets. Once you subtract this total from operating cash flow, you get free cash flow. 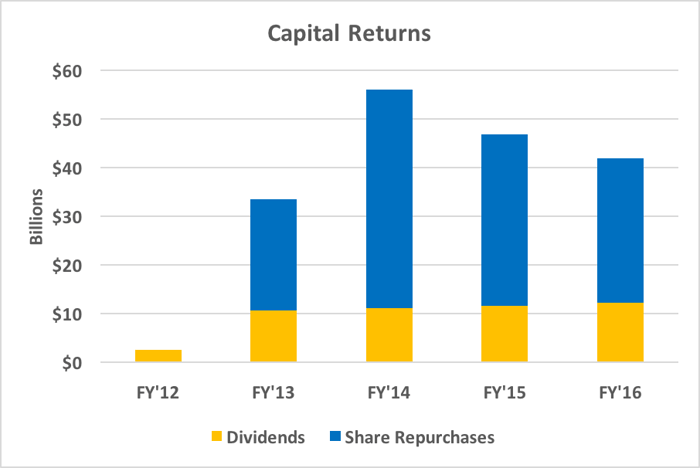 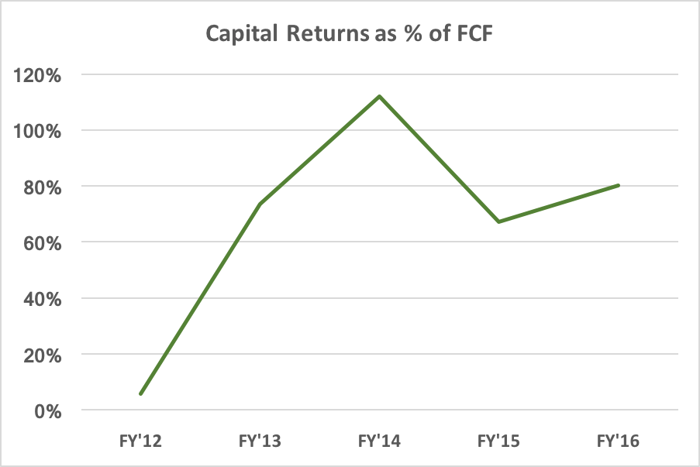 Of course, these are based on consolidated financial results, and Apple funds the majority of its capital return program with debt issuances that aren't tied directly to operating cash flow or free cash flow. So it's worth acknowledging that the company's capital return program is also a function of its ability to continue raising debt (Apple now has nearly $80 billion in long-term debt), unless there's a tax repatriation holiday that allows some of that money mountain to come back to the U.S.

This also helps investors know what to expect in April, when Apple gives its annual update to its capital return program. For instance, here's how Apple has boosted its share repurchase authorization since 2013.

Since operating cash flow, and thus free cash flow, declined in fiscal 2016 and is unlikely to unexpectedly soar in fiscal 2017, I wouldn't expect another massive increase in the share repurchase authorization this coming April. As of right now, Apple has approximately $40 billion remaining on the current authorization, and has been buying back an average of $7.4 billion of shares per quarter over the past year.

So by the time April rolls around, Apple should still have a decent amount of authorization remaining, so I would expect it to lean toward the conservative side of its historical increases.