Call it the Battle of the Plastic Behemoths. Visa (NYSE:V) and American Express (NYSE:AXP) are -- along with MasterCard -- the world's biggest payment card companies. If there's a credit card or debit card in your wallet, odds are good that one of them is processing your transactions. But between these two financial services monsters -- Visa and Amex -- which is the better stock to buy for your portfolio right now?

Before we delve into the pluses and minuses of each, we have to touch briefly on the most important distinction between the two -- Visa (and MasterCard, while we're on the subject) operates an open-loop system, while AmEx is run as a closed-loop system.

"Open loop" is industry jargon essentially meaning that the operator functions only as a facilitator of payments through its system. It is not the issuer of credit. Typically the entity actually lending card holders the money is a financial institution such as a bank.

In a "closed-loop" system, the payment processor and issuer are one and the same. When you swipe with most AmEx credit cards, AmEx itself is paying for the purchase, and expecting you to settle the bill with it later.

All other things being equal, I favor the latter business model. Yes, being a payment-facilitating middleman (like Visa) isolates a company from credit risk. However, because an all-in-one operator is acting as a lender, it has reams of credit data on its clientele.

Because of this, it can cherry-pick its clients, then shape come-ons and offers for them that spur increased use of its credit cards. Over the years, AmEx has become quite adept at this; its rewards programs are some of the most popular and robust across the payment card industry.

More swipes on the card

So in my view, AmEx has the edge in terms of its business model. That's only part of the story, though. What about recent performance?

The two companies have been doing rather well in terms of fundamentals lately, but there are a few buyer bewares for both.

In its third quarter, AmEx did better than many expected -- revenue, and specifically, net income, came in above analysts' expectations. Yet both still fell on a year-over-year basis (the former declined by 5% to $7.77 billion, and the latter dropped 10% to $1.14 billion).

That was largely because the company lost its sweetheart deal with retailer Costco Wholesale (NASDAQ:COST). Until June, AmEx was the only credit card accepted there, and was the sole co-branding partner of the warehouse retailer's proprietary credit card.

AmEx's loss was theoretically Visa's gain, as the latter was chosen by Costco to fill both positions (in conjunction with Citigroup, which is now the issuer of the co-branded card). The switch occurred in AmEx's and Visa's most-recently reported quarters.

That goosed Visa's figures, although not by a meaningful amount. This is because Costco is apparently paying almost zero in fees in return for that exclusivity.

What had more of an impact on Visa's fiscal fourth quarter and full 2016 was the absorption of Visa Europe, which --  due to the brand's quirky history -- had been a separate company for years. Visa acquired it in a monster deal last year, and it began to be included in the company's results in Q4.

Even though that addition had been expected, the card giant beat estimates. Its $4.26 billion on the top line (compared to $3.57 billion in Q4 2015), and nearly $1.92 billion in net profit (27% higher on a year-over-year basis) both outpaced analyst estimates.

The company's forward guidance, however, came up short. It believes that fiscal 2017 revenue will grow by 16% to 18% from 2016's $15.1 billion, and earnings will rise in the mid-teen percentages. Those are good numbers, to be sure, but not quite the 19% and 20%, respectively, expected by analysts.

That's in contrast to AmEx, which on the back of its Q3 outperformance boosted its 2017 earnings outlook. It now anticipates adjusted EPS will fall in the $5.90 to $6.00 range, well exceeding the $5.74 modeled by analysts.

Since their respective earnings releases, AmEx's stock price has risen by 11%, while Visa's has slumped marginally.

Zooming out on a longer time frame, over the past year AmEx is down by 11%, while Visa is treading water with a gain of 6%. To me, that shows that investors have still not forgiven AmEx for being dumped by Costco.

As far as key valuations are concerned, in spite of their diverging trajectories, Visa is still by far the more expensive stock. Its price to book value, trailing 12-month price to earnings, and forward P/E are way higher than those of its rival. 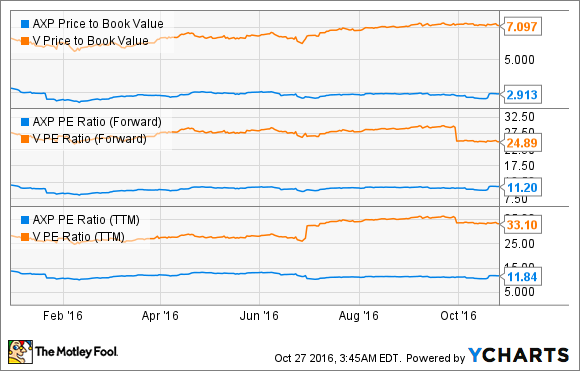 Although Visa is expected to grow its business more significantly, AmEx is still the cheaper stock on a P/E to anticipated growth basis at a ratio of 0.61 versus Visa's 0.77. (The higher the number, the more expensive the shares; typically, stocks priced above 1.0 are considered to be overvalued, while those below represent bargains).

Finally, there are dividends to consider. Thanks to the rise in its stock price, Visa's annual $0.66 per share payout only yields 0.8% these days. That's barely enough to get an income investor out of bed.

Meanwhile, AmEx's distribution yields 1.9%. That's no great shakes when compared to the 2.1% average of dividend-paying stocks on the S&P 500 index, but it's miles better than Visa's.

Both companies are performing well, regardless of the market's current sentiments. But AmEx is a recovery story that is yet to be fully told, while Visa's current and future success is largely priced into its stock. And the former is more generous with its payout.

So for me, AmEx is the preferable investment just now.