Suburban Propane Partners LP (NYSE:SPH) is kind of a boring investment in the energy space, even though its revenue can be kind of volatile. Add that to the fact that one of its main competitors, Ferrellgas Partners (OTC:FGP), is imploding, and you might think there's more to worry about here than there really is. With that in mind, let's look at three terrible reasons to sell Suburban Propane Partners LP and its lofty distribution yield.

1. No one saw that coming

On Sept. 28, Ferrellgas Partners shocked its unitholders by announcing the abrupt departure of its CEO, the reinstatement of its founder as its interim leader, a large non-cash write-off of investments in the midstream space, and the potential that the distribution could be cut in half. The stock plummeted on the news, and rightfully so. The midstream investment was supposed to be a growth driver, not something that would take out the distribution and push earnings deep into the red. The partnership's roughly 20% yield is a huge question mark, at best. 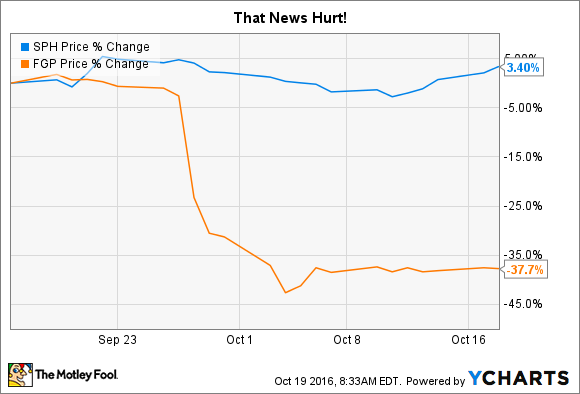 Suburban Propane isn't Ferrellgas Partners. That may sound obvious, but it's important to see the differences here. Ferrellgas is now dealing with the aftermath of an ill-timed expansion effort into an area outside its historical core. Suburban Propane has stuck to its knitting with its propane distribution business, so the risks that have hit Ferrellgas are vastly different than the risks investors face at Suburban Propane.

Another bad reason to sell Suburban Propane is its top line. The truth is, you can't tell all that much about what's going on at the company from its sales, because Suburban makes money by delivering propane -- not selling it. The actual cost of the propane largely gets passed on to customers.

However, Suburban has to buy the propane it sells before it can deliver it. And as such, the price of the fuel has an outsize impact on the top line. But the impact on the bottom line is much smaller. For example, the price of propane fell more than 50% year over year in fiscal 2015, causing the company's top line to decline nearly 27%. However, net income fell only about 11% or so, and largely for other reasons. More on that in a second.

In other words, if you own Suburban, you shouldn't pay all that much attention to the price of propane or the company's revenues. They obscure the fact that Suburban is really a middleman, getting paid for delivering fuel. 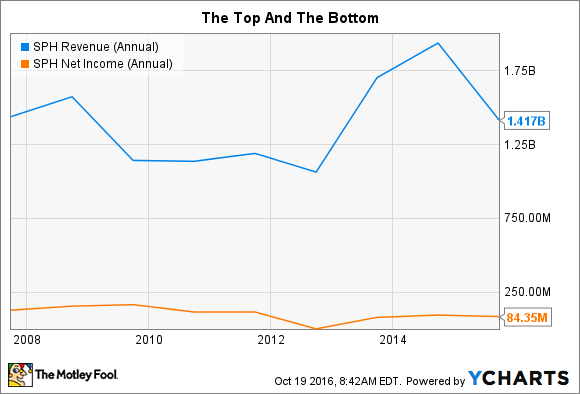 But here's a big question. If the price of propane wasn't what led net income 11% lower in fiscal 2015, what did? The answer is the weather. Although propane has a number of uses, including drying crops and powering forklifts, it's primarily used for heating. As fiscal 2015's winter season was abnormally warm, the company delivered 9.5% less propane.

But even the weatherman can't reliably predict the weather -- and you shouldn't try to. For example, in the recently ended fiscal third quarter, the company reported that "average temperatures across all of our service territories (as measured by heating degree days) for the third quarter of fiscal 2016 were 9% warmer than normal and 7% cooler than the prior-year third quarter."

The partnership's fiscal third-quarter results improved roughly 25% year over year. It still posted a loss, but that's typical of the third quarter, which isn't a major heating season. The big takeaway is that you shouldn't get too caught up in the impact of weather. The longer-term issue is the company's continued efforts to grow its customer accounts through bolt-on acquisitions -- such as the mid-December 2015 deal to buy a Florida propane company that added over 7,500 new customers.

Competitors hitting the skids, a top line driven by often volatile commodity prices, and results that depend on the weather? It would be understandable if you got spooked by these facts, but they really are three terrible reasons to sell Suburban Propane Partners LP. With a 10% distribution yield backed by a distribution that's gone up in nine of the past 10 years, Suburban is really not as exciting as you might think. And, for unitholders, that's a good thing.