For a product category this young, it's a bit discouraging to see it continue to shrink. It was only in 2010 that Apple (NASDAQ:AAPL) kicked off the tablet renaissance with the original iPad, and for a while there it looked like tablets had a lot of potential to disrupt the PC market. The mobile revolution was in full swing, and having a "giant iPhone" wasn't really a bad thing. Once upon a time, I even thought that the iPad would one day overtake the iPhone in terms of revenue, but that was when the tablet was on a strong upswing driven by adoption. Little did I know that worldwide tablet shipments would peak less than a year later.

They've been trending lower ever since.

Market researcher IDC has put out its most recent estimates on the tablet market. Total units in the third quarter came in at 43 million, down 15% from a year ago. The iPad led the way with 9.3 million units, enough to grab 21.5% of the market. The sub-category that's faring the best right now are low-cost detachables that are priced at $200 or less, according to IDC. These tablets don't have any illusions about replacing the PC; they just want to offer a tablet experience at a low price point. This is more or less Amazon.com's (NASDAQ:AMZN) strategy with its Fire lineup -- and it's working, as Amazon's unit volumes are bouncing back, more than quadrupling last quarter. 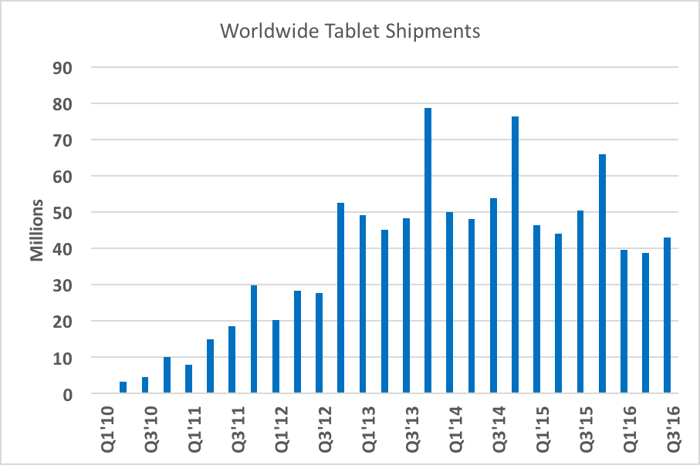 Seeing this chart really helps contextualize why Apple has deprioritized iPad product cycles. The iPad maker started elongating iPad cycles a few years back, and seems to be moving toward updating devices every two years. It's too early to say for sure, since Apple is simultaneously expanding the iPad family, which now includes Minis, Airs, and Pros, but it's rather telling that Apple didn't offer any updates at either of its autumn product events.

Perhaps more interesting is that IDC does not think the iPad Pros are selling particularly well. The researcher estimates that the Air and Mini continue to comprise more than two-thirds of unit volumes. There has been a marginal lift in iPad average selling prices with the introduction of the iPad Pros, which cost more. This helped Apple generate effectively the same level of revenue last quarter despite a 6% drop in unit sales. Keep in mind that the 9.7-inch iPad Pro that starts at $600 wasn't launched until earlier this year, so the year-over-year comparison suffers a little bit.

Still, you can't help shake the feeling that Apple's iPad Pros could be doing better, particularly in the context of Apple's big enterprise push.