It's no secret that Apple, Inc. (NASDAQ:AAPL) cares a lot more about its laptops than it does its desktops. The company consciously focuses its development efforts and innovation on MacBooks over iMacs, Mac Minis, or Mac Pros. New features and technologies almost always start in Apple's laptops, before often making their way to the desktop. For example, Apple introduced its desktop trackpad after adding more and more gestures to macOS as it focused on touch-based interactions.

Considering the dominance of laptops in Apple's unit volumes, this is entirely expected and rational. Apple stopped breaking down its Mac units by category a few years ago starting in fiscal 2013. But up until fiscal 2012, it was pretty clear what category was driving sales: Laptop sales outnumbered desktop sales by 4-to-1 in Q4 2012. 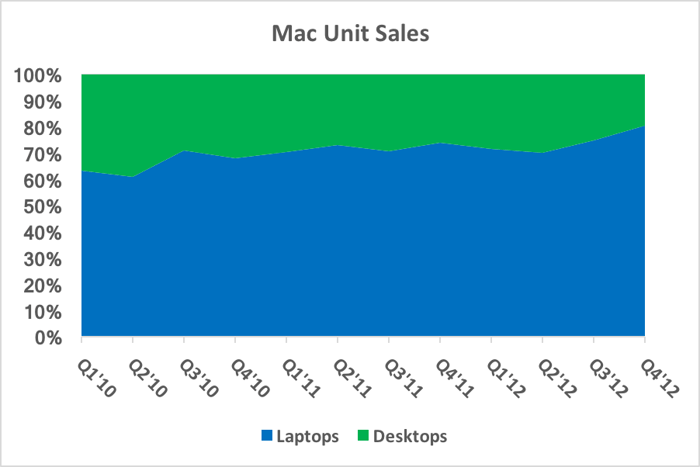 This trend has likely continued in the years since. So yeah, Apple puts a lot more emphasis on MacBook innovation. With that in mind, how will Apple bring its new Touch Bar and Touch ID to desktop Macs?

It won't be easy

It goes without saying that if Apple wants to bring Touch Bar and Touch ID to desktops, it will need to integrate the OLED panel into its own keyboard accessories. A stand-alone bar without the keyboard would just be ridiculous and hard to use. But there are some technical considerations to acknowledge when adding a display. Apple can't just slap a display on an existing keyboard and call it a day.

Since the Touch Bar is a display that dynamically changes based on context, it would be tricky to implement on a wireless keyboard because of potential latency issues associated with trying to transfer data wirelessly to the display. While the Touch Bar uses OLED technology, which is more power-efficient than LCDs since no backlight is required, displays still use quite a bit of energy. A wireless keyboard with a Touch Bar would need to be charged more frequently due to increased power consumption. Additionally, Apple is using a new custom-designed T1 chip to power the Touch Bar as well as to securely store Touch ID fingerprint data. That requires even more power. Adding an OLED display and the extra processing power would also jack up the price in a big way.

The seemingly obvious solution here is to make a wired keyboard, which would address all of these challenges. But Apple has been touting a wireless future across its lineup for years, most prominently with the removal of the iPhone 7 headphone jack. Introducing a wired keyboard with Touch Bar and Touch ID could be perceived as a philosophical step backwards.

Do you remember when Apple first introduced Touch ID in the iPhone 5s in 2013? It was an inevitable addition following Apple's 2012 acquisition of AuthenTec for its fingerprint sensor technology. Initially, there weren't many uses for Touch ID, but in the years since, users have grown accustomed to the added convenience and security. We arguably take for granted how easy it is to unlock our phones or pay for things now. Touch ID can't entirely replace alphanumeric passwords yet, but Apple has been trying to kill the password for years.

More broadly, the tech industry has been pushing for a transition away from passwords as well. The Fast Identity Online (FIDO) Alliance was created for precisely that purpose. FIDO helps develop technical specifications that are open and scalable with the goal of improving online security, and its member list is a who's who of technology, finance, and payments companies. Apple is not a member, and it's not clear why, since it would be an influential addition.

Fast-forward, and imagine a future where all websites and apps adopt standardized protocols to login and pay using secure biometric fingerprint data, which was once only available in enterprise applications that were willing to pay for added security. This has yet to be done on a consumer level at scale, but it's clearly where we're headed. Nothing will ever be 100% secure, but the potential upside in convenience and security relative to the status quo is enormous. To get there, Touch ID must be available on both laptops and desktops.

Eventually, Apple will need to figure out a way to bring Touch ID to desktop Macs, despite the technical challenges it needs to solve first.