Following quarter after quarter of falling unit revenue, airline executives are starting to see a light at the end of the tunnel. The improving outlook caused shares of most airlines to rally after their Q3 earnings reports last month.

Hawaiian Holdings (NASDAQ:HA) and Allegiant Travel (NASDAQ:ALGT) both reported stronger than expected earnings last quarter. Yet they didn't join in the airline sector rally. In fact, both stocks have declined significantly since reporting their Q3 results. 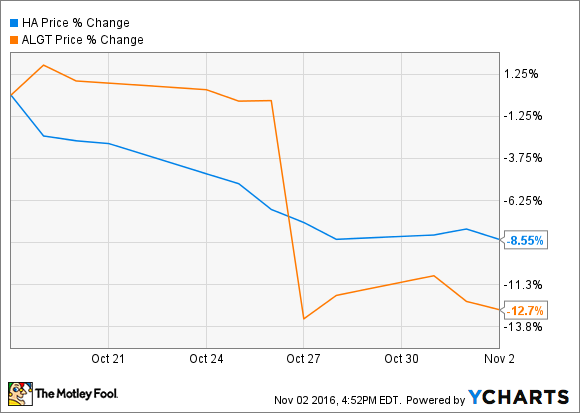 Investor concerns about rising unit costs probably played a big role in driving shares of Hawaiian Holdings and Allegiant Travel lower in recent weeks. However, both companies have solid plans for long-term profit growth, which should help the stocks rebound soon enough.

Last quarter, Hawaiian Airlines was the only U.S. airline to grow its unit revenue year over year. Initially, Hawaiian stock jumped after the company raised its Q3 unit revenue guidance in early October. It has given back all of those gains in the past few weeks, though.

Hawaiian's revenue outlook can't be blamed. The company expects revenue per available seat mile (RASM) to rise 0.5% to 3.5% year over year in Q4. At the midpoint, that would improve upon the 1.3% increase Hawaiian Airlines recorded in Q3.

Instead, investors were dismayed by management's forecast that non-fuel unit costs will increase 2.5% to 5.5% year over year this quarter. There's no single cause of this cost pressure. It's a combination of increases in wages and benefits, higher aircraft rent as Hawaiian expands its fleet, rising airport fees in Hawaii and Los Angeles, and various other smaller headwinds.

Costs will continue to rise at an elevated pace in 2017. First, Hawaiian Airlines is deep in negotiations with its pilot union on a new contract that is likely to include hefty raises. Second, it plans to move into a brand new (but more expensive) maintenance and cargo facility in mid-2017. Third, the company will incur costs related to putting its new fleet of A321neo aircraft into service next year. Finally, Hawaiian is reconfiguring its A330 fleet with fewer seats, which will naturally push unit costs higher.

Allegiant investors got an even bigger shock last month, as the company projected that non-fuel unit costs will surge 10% to 12% year over year in Q4. Most of the increase is being driven by the substantial raises that Allegiant recently gave its pilots, as well as accelerated depreciation on the company's aging fleet of MD-80 aircraft.

To make matters worse, Allegiant isn't generating industry-leading unit revenue performance like Hawaiian Airlines. RASM fell 7.4% year over year in Q3 -- which was still better than the company's original guidance -- and Allegiant expects RASM to decline 5.5% to 7.5% in Q4.

Allegiant Air is likely to continue facing higher-than-normal unit cost inflation in 2017, at least until it laps the impact of its new pilot contract next August. On the bright side, Allegiant's fleet renewal program is steadily boosting the carrier's fuel efficiency. That will mitigate the impact of any fuel price increases.

Costs matter in the ultra-competitive airline industry. Nevertheless, investors are probably overreacting to the unit cost increases at Hawaiian Airlines and Allegiant Air.

Hawaiian Airlines is well positioned to offset any unit cost increases over the next few years with unit revenue growth. For example, the carrier recently began selling its new lie-flat premium seats on four long-haul routes for flights beginning in December. In 2017 and beyond, the continued rollout of lie-flat seats should allow Hawaiian to more than offset the increase in unit costs from removing seats on those planes.

Meanwhile, Allegiant should be able to start reducing its unit costs again as soon as the second half of 2017. Most notably, as the company moves toward standardizing on A320-family aircraft over the next three years, maintenance costs will decline and accelerated depreciation of the existing MD-80 and 757 fleets will end. Allegiant's unit revenue is also starting to recover, and is expected to turn positive by the second half of 2017.

Hawaiian Holdings and Allegiant Travel could see profitability slip in the near term. But both carriers have attractive long-term growth opportunities and should be able to maintain double-digit profit margins for the foreseeable future. The recent sell-offs in both stocks have created good entry points for patient investors.