It's hard to find qualified healthcare professionals, but AMN Healthcare (NYSE:AMN) has worked hard to make that job as easy as possible for its clients. The company's successes have built on each other and produced positive momentum for the business. Coming into Thursday's third-quarter financial report, AMN Healthcare investors fully expected to see solid growth from the healthcare staffing specialist. AMN's results featured good revenue growth and some strength on the bottom line, as well. Let's take a closer look at how AMN Healthcare did and whether it can keep benefiting from favorable industry conditions. 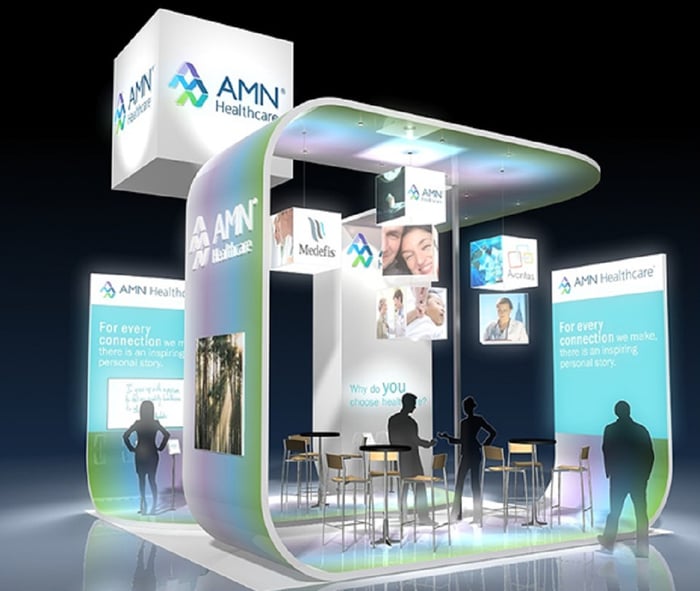 AMN Healthcare's third-quarter results reflected the favorable conditions in the healthcare industry right now. Revenue was up 23% to $472.6 million, slightly outpacing the consensus forecast among investors. GAAP net income was down by nearly a fifth from the year-ago period, but on an adjusted basis, adjusted earnings came in at $0.62 per share. That was $0.08 per share better than most of those following the stock had expected and was 29% higher than the year-ago figure.

Looking more closely at its numbers, AMN had a good balance of sources for its growth. Organic revenue gains of 12% made up more than half of the company's overall top line increase, with the rest coming from smart strategic acquisitions to keep its pipeline strong. Gross margin fell a fraction of a percentage point, but favorable declines in overhead expenses helped offset that downward impact.

On a segment-by-segment basis, AMN still looks good. The nurse and allied solutions segment posted 16% higher revenue, and that came even in the face of fewer labor disruptions in the industry than normal. Travel nurse revenue climbed by more than a fifth, while allied revenue was up 10%. Meanwhile, in the temporary locum-tenens area, sales rose a more modest 7%. Acquisitions helped revenue from AMN's other-workforce division more than double from year-ago levels. Similar trends played out in looking at segment operating income, with other-workforce performing the best, nurse and allied solutions rising at a healthy pace, and locum tenens posting more moderate growth.

CEO Susan Salka celebrated her company's results. "Our results this quarter reflect a positive market environment," Salka said, "but are also a testament to the team's outstanding execution as we partner with our clients to help them manage their significant labor challenges and enable them to stay focused on deliver[ing] quality patient care."

AMN Healthcare thinks it's in a good position to keep producing strong results. In the CEO's words, "The current demand levels, indicators of our clients' future needs, and our leading market position provide us with optimism heading into 2017."

AMN's latest guidance was consistent with what investors were already expecting to see. For the fourth quarter, AMN believes that its revenue will be between $473 million and $479 million, which neatly surrounds the current consensus forecast among investors. That would correspond to a growth rate of between 18% and 19%, and the company thinks that out of that amount, about 10 percentage points would come from organic growth, while the rest would stem from acquisitions that AMN has made in the interim. Gross margin and adjusted EBITDA margin figures are both also in line with investor expectations and past performance.

AMN Healthcare investors were happy with the results, sending the stock higher by 4% in after-market trading Thursday following the announcement. If conditions in the healthcare industry remain as strong as they have been, then AMN should be able to keep succeeding over the long haul.