There's no question McDonald's (NYSE:MCD) is a valuable, global brand. With over 36,000 restaurants in over 100 countries, its famous golden arches logo is instantly recognizable just about everywhere around the world. But like its sales record in recent years, the fast food chain's brand value has become a little tarnished. 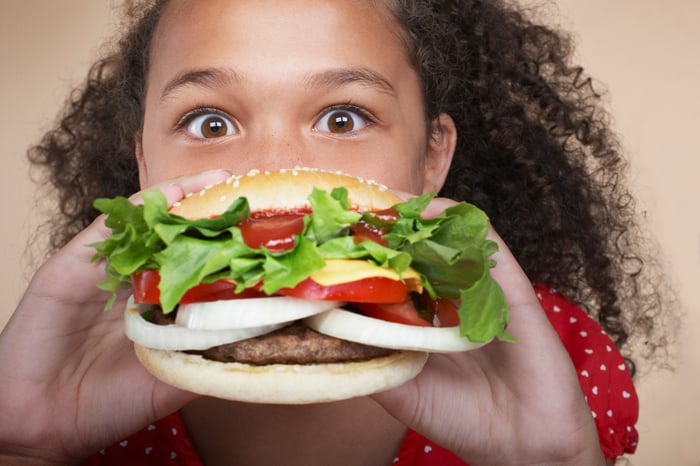 McDonald's troubles began when it strayed away from its value meal positioning, seeking millennials that had moved on to fast casual chains. Image source: Getty Images.

The value of over 1 billion served

For 16 years the brand consultants at Interbrand have measured and tracked the 100 biggest and best global brands, and for 15 straight years McDonald's has always ranked within the top 10, peaking at No. 6 back in 2011. This year is the first year since Interbrand began calculating the best brands that the Big Mac maker did not crack the elite ranking.

Perhaps more problematic is the decline in the actual value of the brand. Between 2003 and 2014, McDonald's brand value marched steadily higher, climbing from $24.7 billion to $42.3 billion, a 71% gain, or a 5% compounded annual growth rate for more than a decade. Not too shabby.

But that's also when things began to go south for McDonald's, first with its ranking falling from seventh to ninth, and then with its brand value beginning to decline, which now sits nearly 7% below its peak. 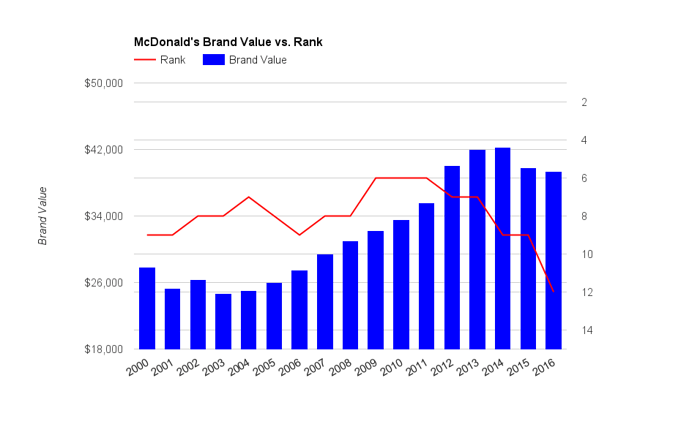 That this coincides with the problems McDonald's began experiencing at that time should come as a shock. Interbrand puts a lot into determining a brand's value. The ISO-certified methodology looks at how a business delivers on customer expectations to what it does to drive economic value, with the rankings based on a brand's cumulative value in three key areas:

From that assessment, it organizes the list of top 100 companies.

McDonald's woes, both operationally and with its brand value, can probably be traced back to when it decided to "break the buck" and raise prices on its Dollar Menu, rechristening it the Dollar Menu & More and featuring items that cost as much as $5.

It was a small change that didn't seem to alter the value proposition McDonald's offered while allowing for the possibility of incremental profits. The fast-food industry was already under pressure from fast-casual leaders, and peers like Wendy's (NASDAQ:WEN) and Burger King both introduced new menus that featured higher-cost items.

But where the menu changes didn't seem to affect those chains, McDonald's suffered a backlash, and sales weakened. It soon turned into a two-year long slide that wasn't helped by its decision to also offer healthier fare, like side salads, fruit, and vegetables. The policy was expanded upon further when newly appointed CEO Steve Easterbrook decided the fast-food joint needed to pursue millennial consumerism in a bid to become something of a fast-casual chain itself. 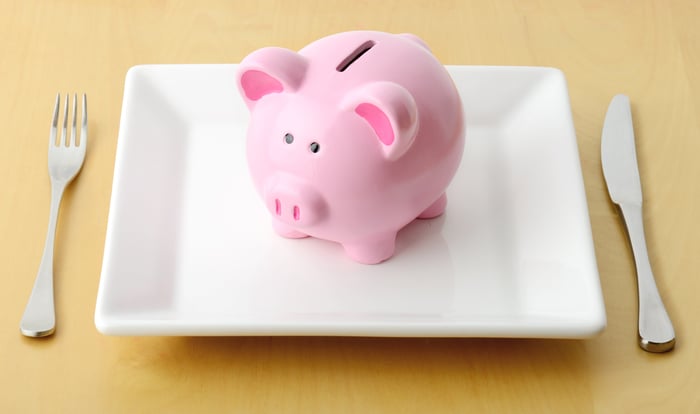 McDonald's gave customers a mind-boggling array of fresh ingredient options to choose from, self-service kiosks to place orders, and a more upscale image (for a McDonald's, anyway). None of the changes worked. It wasn't until the burger chain relented to consumer demand and began offering all-day breakfast that it was able to record higher quarterly comparable sales.

Comps are an important retail metric because they largely strip out the growth a restaurant could achieve simply by opening more locations, so it's considered a more organic view of a company's financial health.

Yet comps also take into account prices a restaurant charges and whether customers are ordering more expensive items, and as McDonald's track record shows, it's still unable to bring more customers in. Instead, it's been relying upon those higher-priced menu items to achieve those five straight quarters of comps growth. Customer traffic, unfortunately, is still falling.

No need for a traffic cop yet

In its just-released third-quarter results, McDonald's says guest counts have fallen by 0.1% for the past nine months. However, that is decidedly better than the 3.1% decline it notched a year ago over the same period and could indicate that the burger joint is poised to see customer traffic turn positive.

Should McDonald's be able to turn that corner, we could very well see it become a top 10 global chain once more, where its brand's value is as golden as its arches.