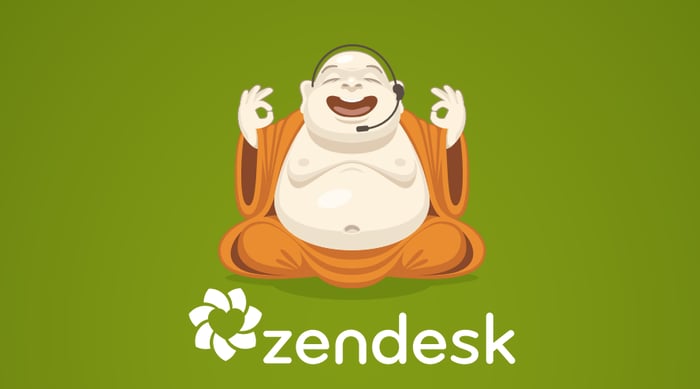 Founded in a Danish apartment in 2007, Zendesk (NYSE:ZEN) has become increasingly important for small and medium-sized businesses. The customer-service platform Zendesk offers has extremely high switching costs: Who would want to throw away all of that data and retrain employees on a new platform?

That competitive advantage persuaded me to buy shares earlier this year. After going over the company's third-quarter earnings release this week, I remain optimistic, but there are a few problems that have cropped up that give me pause. Read on to see what the three biggest takeaways were for the quarter.

Zendesk's bread and butter, as I've said, is in providing customer-service solutions to small and medium-sized businesses. Some of the problems that cropped up this quarter have to do with going after bigger enterprise fish, but I'll get to that later.

If we zoom out to 30,000 feet, both the company's revenue growth history and its growing list of clients are very encouraging.

If we compare results for the most recent quarter to the same time in 2014, paid accounts have grown by 34% per year, while revenue has bumped up an even more impressive 54%.

The bottom line is that this company is still popular with its customers, providing a solution that more and more believe they can't live without.

However, as you might have noticed by the stock's 10%-plus dip on Wednesday, the release wasn't all roses. Founder and CEO Mikkel Svane opened his prepared remarks by saying:

During the last six months, we've seen some organizational change. ... [W]ith that, we had some disruptions ... that impacted the latter part of the third quarter. As a result ... we did not execute to our full potential."

Whenever a company's ambitions grow faster than its infrastructure, this can happen. Earlier this year, Zendesk brought Bryan Cox on board in the C-suite to help redesign the structure of the sales force. The idea was that Cox, previously  a senior VP at VMWare, would help design a more efficient sales team that could nab larger enterprise customers looking for better customer-service solutions.

As expected, such changes can take time to take hold. And in the interim, there's disruption. While management didn't supply specifics, it sounds as if the company may have lost a few potential clients altogether because of this disruption -- which is no doubt disappointing for shareholders. If these potential clients were bigger in size, it could be an ominous start to Zendesk's foray into enterprise.

At the same time, the company acknowledged that it was knocked offline during the previous quarter as well. Svane admitted: "[Y]es, we had a little bit of a disappointment in terms to our uptime, and we were affected by a lot of the bigger incidents that were on the Internet. And that affected our customers."

Obviously, having a major outing is bad. Businesses don't have access to all of the data they need, and it makes them question Zendesk's reliability. It's doubly bad when that outage happens while trying to woo bigger customers, who might question Zendesk's ability to handle larger infrastructure needs.

In the end, it's far too early to see if any of these challenges will leave a permanent dent in the company. In fact, management now has an opportunity to show that it can grow and become stronger as a result of such occurrences.

Finally, I think it's worth pointing out that stock-based compensation remains a huge part of Zendesk's standard operating procedure. This isn't necessarily anything new, but it became very clear to me reviewing the numbers from the previous quarter.

Take a look at revenue versus stock-based rewards over the past two years.

There are two important results here. First, stock-based compensation has typically been equal to a quarter of total revenue -- a fairly high clip. But more importantly, since the fourth quarter of 2014, the company's share count has ballooned from 71.7 million shares outstanding to 95.6 million. In other words, investors have been diluted by 25% over the past two years.

Of course, having a motivated workforce is important, and Zendesk is second to none here. According to Glassdoor, the company's employees give it a 4.6 rating (out of 5), with Svene having  a 97% approval rating. That's important, but eventually business growth will slow, and it will be important to see the stock-based compensation slow in kind.

It's something I'll be keeping an eye on.

At the end of the day, I'm still happy to be a shareholder; I just have a few more yellow flags to keep an eye on.