Income investors prize so-called Dividend Aristocrats above all other stocks. The Dividend Aristocrats are a set of several dozen stocks in the S&P 500 that have increased their dividends every year for at least 25 years. Top U.S. energy company ExxonMobil (NYSE:XOM) is a member of this elite group, having increased its dividend for 34 years running. 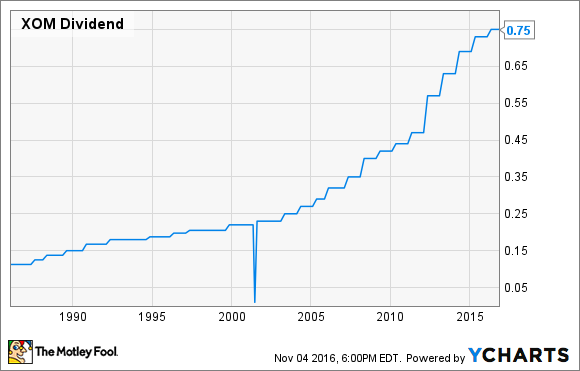 Dividend Aristocrat stocks like ExxonMobil are typically seen as safe. After all, a company's ability to raise its dividend year after year is usually an indicator of predictable growth. Yet ExxonMobil is anything but a safe investment these days.

Many market pundits think that stocks are wildly overvalued right now. ExxonMobil is a prime example of a large-cap stock with an inflated earnings multiple.

Analysts currently expect ExxonMobil's earnings per share to fall to $2.18 this year, down from $3.85 a year earlier. ExxonMobil shares trade for more than 38 times that earnings estimate. For comparison, just a few years ago, ExxonMobil stock traded for less than 10 times earnings. 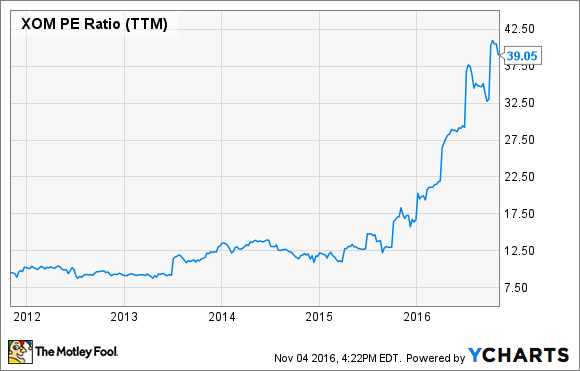 ExxonMobil's position as a Dividend Aristocrat is one reason for its lofty valuation. The company's quarterly dividend is $0.75 per share, providing a roughly 3.6% annual yield. That makes it attractive relative to bonds or bank deposits for income-seeking investors -- assuming the principal and the dividend payout are both safe.

A second reason for ExxonMobil's high earnings multiple is that many investors expect the company's earnings to rebound -- and relatively quickly at that. However, both of these rationales may be faulty.

How valuable is the dividend stream?

Ideally, income investors would like to invest in companies with a healthy margin of safety between their earnings and their dividend payouts.

In the short run, this works because ExxonMobil still has a strong balance sheet. The company is very committed to remaining a Dividend Aristocrat, so shareholders are likely to see modest dividend increases in the next few years. But unless ExxonMobil's profit improves significantly, future dividend increases won't be sustainable.

Furthermore, the Federal Reserve is on track to raise its target interest rate next month, and further rate increases are probably in the cards for 2017. As yields rise for government-backed investments that are truly safe, a 3.6% dividend yield won't be enough to keep ExxonMobil stock trading at a steep premium to the broader market.

In addition to overvaluing ExxonMobil's future dividends, investors may be overconfident in its future earnings potential. Right now, Wall Street analysts expect the company to nearly double its EPS to $4.27 in 2017, driven by a 36% surge in revenue.

Many analysts expect ExxonMobil's profit to rebound in 2017. Image source: The Motley Fool.

This bullish forecast implies that investors expect much higher oil prices on average next year. Yet oil prices seem to be falling into a new rut.

In late September, OPEC and some other major oil producers reached a tentative agreement to make modest production cuts. However, in recent weeks, this deal has all but fallen apart. Meanwhile, U.S. oil companies used the temporary spike in prices last month to increase drilling activity. As a result, domestic production has stabilized, even though supply is still outpacing demand and petroleum inventories are near historic highs.

It seems increasingly likely that oil prices will stay around $50 per barrel (or perhaps a bit lower) for the foreseeable future. Cost cuts are allowing nimble producers to ramp up production whenever oil prices cross that threshold.

ExxonMobil's own cost-cutting efforts will allow it to make money even with low oil prices. But it won't come close to the level of profitability it enjoyed a few years ago, when oil sold for more than $100 per barrel.

This is not a safe dividend stock

Some income investors may be comforted by the current analyst projections that ExxonMobil's EPS will nearly double to $4.27 next year. That would allow the company to fully cover its dividend. But those investors might be less confident if they remembered that at this time last year, analysts expected ExxonMobil's EPS to exceed $4 in 2016.

To be fair, ExxonMobil should be able to generate at least some earnings growth next year. It may even earn enough to fully cover its dividend. But the combination of another year of low oil prices and rising interest rates could take the air out of ExxonMobil stock. This is one Dividend Aristocrat that safety-seeking income investors should avoid.