Silver and gold prices were at their peak during the third quarter, which allowed precious metal producers to generate gobs of free cash flow. That said, as good as the quarter has been for miners, it could be even better for streaming company Silver Wheaton (NYSE:WPM) since its unique cost structure positions it to capture a boatload of cash flow in a rising price environment. Needless to say, investors cannot wait to see how much money the company hauled in during the quarter.

Cashing in on peak pricing

Most precious metal producers have spent the past couple of years focused on getting their costs down, which would allow them to generate more cash flow at lower prices. Because of that, leading gold producer Barrick Gold (NYSE:GOLD), for example, can generate free cash flow as long as gold is over $1,000 an ounce. Another benefit of driving costs down is that it also positioned the gold miner to produce substantial cash flow if prices improved, which was certainly the case during the third quarter: 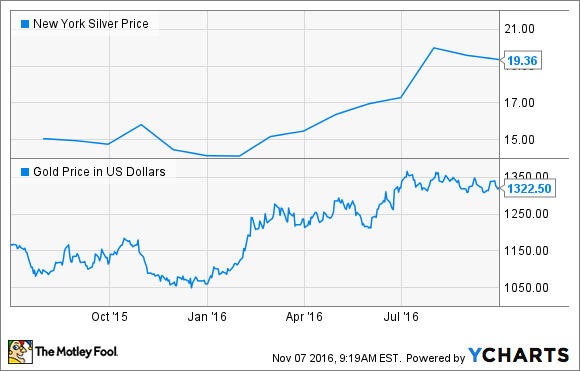 In Barrick Gold's case, it produced $674 million of free cash flow during the third quarter, which was $400 million higher than the previous quarter. That surging cash flow allowed Barrick to stay on pace with its debt reduction target without needing to sell any additional assets.

Likewise, America's largest silver producer, Coeur Mining (NYSE:CDE), reported a 20% sequential increase in its free cash flow, which rose to $14.6 million. That is despite the fact that Coeur Mining's production declined 10% sequentially thanks to several issues. Further, Coeur Mining had also increased its second-half exploration budget by $8 million and its capex budget by $10 million, which consumed some of its free cash flow.

Finally, precious metal streaming and royalty company Royal Gold (NASDAQ:RGLD) reported record quarterly revenue and earnings thanks to the higher prices. Further, Royal Gold's operating cash flow exploded higher, jumping from $2.5 million in the year-ago quarter to $55.1 million this quarter thanks to a 19% increase in its realized gold price and a 34% improvement in volume.

Because of these strong reports, Silver Wheaton's investors are expecting the company to report a similarly robust result. That is especially true after the glimpse into the future CEO Randy Smallwood provided in the company's second-quarter report. He said Silver Wheaton's portfolio of streaming contracts positions it to "reap even more robust cash flows when commodity prices turn." In fact, Smallwood went on to boast that the company looks "forward to demonstrating to investors how powerful our cash flow generation can be in an environment of increasing precious metals prices."

Driving that view is the fact that Silver Wheaton's streaming contracts lock in ultra-low fixed costs, which allows it to convert higher prices directly into cash flow. In fact, the company has secured its costs at $4.52 per ounce of silver and $403 per ounce of gold through 2020. For perspective, that's a fraction of Coeur Mining's $11.96 cash cost for silver and Barrick Gold's $704 per ounce all-in sustaining cost of gold last quarter.

In addition to those low costs, the company should also benefit from its recently completed acquisition of an additional 25% of the gold from its key Salobo mine, which will boost its output at just the right time. That was certainly the case at Royal Gold during the quarter, which benefited from investments it made over the past six quarters to bolster its output and drive record financial results.

Silver Wheaton's investors are looking forward to seeing just how powerful its cash flow generation was in the third-quarter report. They expect the company to report a substantial increase in operating cash flow as it captures higher prices and benefits from the incremental production at Salobo. The company's ability to cash in during the third quarter will put it in the position to create even more value in the future because it can reinvest that bounty into new precious metal streams.