Shares of Hess (NYSE:HES) got hammered in October, ending the month down by double digits. While tumbling oil prices toward the end of the month added fuel to the fire, it did not help matters that the company released weak third-quarter results on Oct. 26: 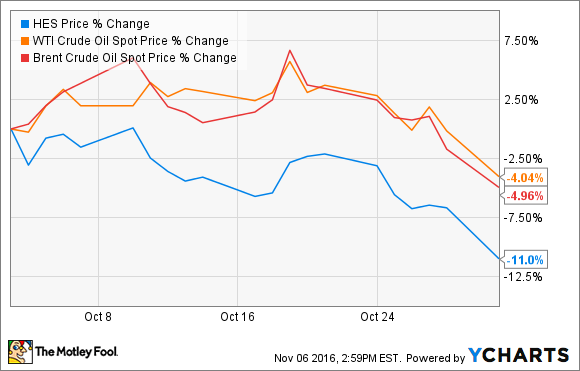 Hess reported an adjusted loss of $340 million, or $1.12 per share, which was deeper than the $291 million, or $1.03 per share, adjusted loss in the year-ago quarter. Driving that widening loss was a 9% decline in realized oil and gas prices as well as the fact that company's production plunged 16% to 314,000 barrels of oil equivalent per day due to reduced drilling activity, planned and unplanned downtime, and natural field declines. On a positive note, its pushed expenses were down 18%, helping to mute some of the impacts from weaker production and prices.

ConocoPhillips (NYSE:COP), for example, also reported that it was decreasing its full-year capex budget, by planning to reduce spending from $5.5 billion down to $5.2 billion. However, despite a roughly similar 5% spending reduction, ConocoPhillips noted that it was increasing the midpoint of its full-year production guidance by 1%. ConocoPhillips' ability to deliver better-than-expected production for less money was one of the things that kept its stock from sinking last month.

While Hess is doing a solid job of pushing down costs, it is not quite as good as some of its rivals when it comes to turning its investments into production. Because of that, it could fall behind as prices improve. It will have a longer climb to get its output back up to where it was at this point last year.