Commercial property services company Jones Lang LaSalle's (NYSE:JLL) third-quarter results contained many moving parts. I will go into more details below but, in summary, the company demonstrated an ability to outperform a weakening market, although margins declined. Meanwhile, management's outlook for 2017 suggests better days ahead. Heres a closer look at the results and what management said about the future.

Let's begin with the key figures from the quarter. It's worth noting that management doesn't give specific guidance, but rather a general market outlook. For reference, it's useful to look at the company's revenue in terms of two streams, Real Estate Services (RES) and LaSalle Investment Management (LaSalle).

Revenue growth looks strong, but clearly there is a reason for the margin decline in the quarter, particularly with LaSalle. Overall operating income margin as percentage of fee revenue fell to 6.1% in the quarter compared to 11% in the same period last year. CFO Christie Kelly addressed the issue on the earnings call and cited a number of reasons for this.

First, three-quarters of the margin decline was attributed to "a reduction in transactional business and our strategic priority to grow annuity income." There is little that Jones Lang LaSalle can fundamentally do about the willingness of parties to make transactions, however the reduction in incentive fees and equity earnings at LaSalle was partly due to the plan to "transition from maturing funds into a new series of funds." Ultimately, Kelly expects "LaSalle's incentive fees and equity earnings should revert to normalized levels" in the future.

Second, the remaining quarter of the margin decline was attributed to some isolated incidences:

Putting all this together, outside of transactional volumes, most of these issues should dissipate. In fact, if incentive fees (LaSalle) recover in line with expectations, they should boost earnings in the future.

As discussed earlier, management doesn't give specific company guidance but it does give overall market guidance. On this basis, its performance is significantly ahead of the market. 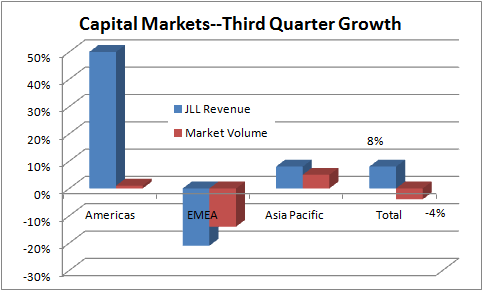 The second chart needs explaining. Gross absorption is the percentage of total commercial real estate space leased in the period -- a higher number is better. Here again, the company is outperforming the market. It's a similar story on a year-to-date basis where company revenue is up 8% compared to a 4% decline in gross absorption. 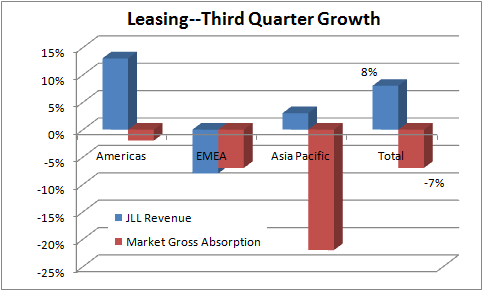 Turning to the market outlook, it's fair to say that management's current outlook for 2016 is worse than when it started the year, but the outlook for capital markets improved a bit in the third quarter. For reference, the Americas contributed around 71% of total RES adjusted EBITDA in the first nine months and 52% of total adjusted EBITDA.

First, a look at forecasts for capital markets volumes for the full-year 2016. Note the improvement in the Americas outlook:

And now gross absorption for the full-year 2016.

Moreover, JLL's outlook for 2017 appears to factor in the recent improvement in capital markets volumes and stabilizing leasing. She sees investment sales rebounding to around $700 billion from a range of $610 billion to $630 billion this year, with "leasing volumes at levels similar to this year."

Given the company's history of outperforming the market, these projections would suggest a solid outlook for Jones Lang LaSalle next year.