Shares of LendingClub Corp. (NYSE:LC) are up by about 17% as of 10:36 a.m. EDT on Monday. The company announced a sequential increase in originations and a new deal with National Bank of Canada (TSX:NA), in which the Canadian bank will purchase up to $1.3 billion of loans from its platform over the next 12 months through its U.S. consumer lending subsidiary.

LendingClub reported that originations grew to 1% from the sequential quarter, rising to $1.97 billion. Compared to the year-ago period, originations fell by about 12%. The company noted that it was able to reduce incentive payments to zero in September, as investors returned to buy loans from its platform. 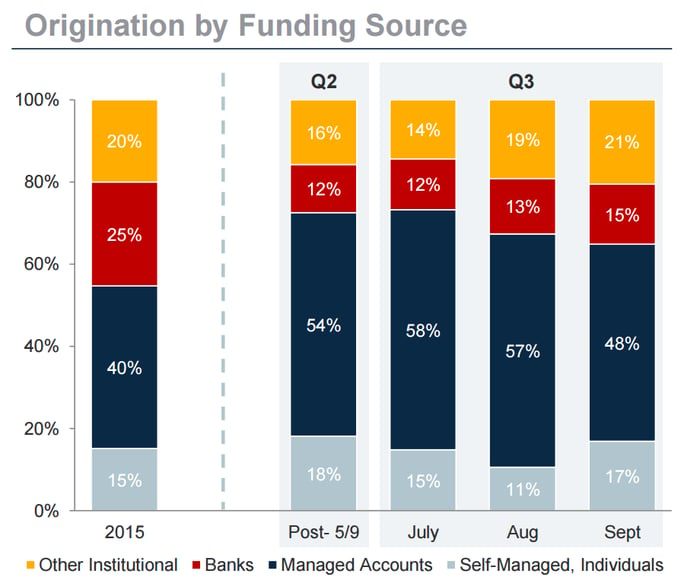 In its earnings release, LendingClub announced that the National Bank of Canada agreed to invest up to $1.3 billion to buy loans off its platform through its Credigy subsidiary. The investment would help LendingClub balance its funding sources after banks cut back on purchases following the May 9, 2016 resignation of then-CEO Renaud Laplanche.

Banks purchased just 15% of its originations in September. LendingClub set a target to grow bank purchases of its loans back to 25% of total originations, roughly in line with banks' share of volume in 2015.

LendingClub announced on its conference call that the first slug investment capital from National Bank of Canada has already been committed in the amount of $325 million. It anticipates that the capital will be deployed over the next three months. Notably, National Bank of Canada will receive some incentives if it deploys the full $1.3 billion commitment.

Going forward, LendingClub hopes to grow origination volume by expanding into auto loans, primarily auto loan refinances. The company previously disclosed on its corporate blog that it will occasionally, perhaps temporarily, finance the loans with its own balance sheet, similar to how On Deck uses its balance sheet to finance some of its loans to small business.

"In plain English, this means that if there is a timing mismatch resulting in more borrower demand for loans than available investor capital, we'll consider investing in and holding the loans with the plan to sell them to investors in short order," the company wrote in a blog post. Car loans are a very different product than its core personal loan. The company will not generate an origination fee from auto loans, and instead seek to make money by recording a gain on the sale of auto loans to investors.

For today, though, investors seem satisfied that LendingClub has shored up its funding sources by inking a deal with National Bank of Canada, even if it comes at the cost of continued incentives.