FMC Corp. (NYSE:FMC) kicked off the third-quarter earnings season for the big lithium players on Nov. 2 by posting strong adjusted earnings growth, driven in part by continued strength in its lithium business. Lithium companies have been benefiting from the sharp rise in the price of this commodity over the last year or so, thanks largely to increasing demand for lithium-ion batteries to power electric vehicles and various electronic gadgets. 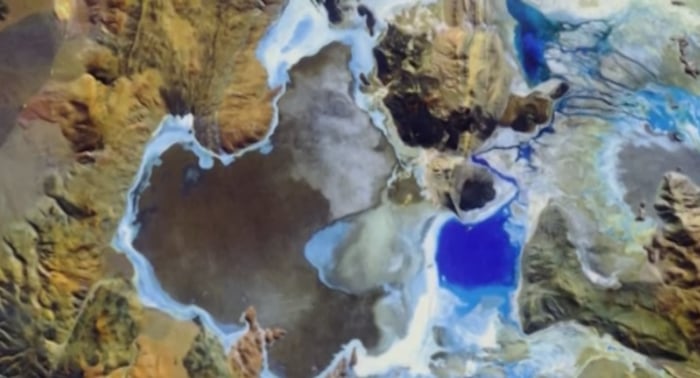 The Philadelphia-based specialty chemical company's revenue declined 2.8% year over year to $807.7 million – topping the $795 million analysts were looking for -- while adjusted earnings per share jumped 60% to $0.67, beating Wall Street's estimates of $0.59. GAAP EPS came in at $0.59 compared to a $0.02 loss in the year-ago period. FMC also raised its full-year 2016 earnings guidance.

FMC's stock soared 10.5% on the day following the earnings release, and it's gained more ground through Tuesday, Nov. 8. The stock has returned 32% over the one-year period through Tuesday, significantly outpacing the S&P 500's 4.2% return. The lithium industry's other two big publicly traded players, Albemarle Corporation (NYSE:ALB) and Sociedad Quimica y Minera de Chile, or SQM, have performed even better, returning about 66% and 59%, respectively, over this period. This is largely because lithium makes up a bigger portion of these two companies' total revenue. FMC's lithium business accounted for 8.7% of its revenue in the quarter, while Albemarle's lithium products accounted for 25.4% of its revenue when it reported its Q3 results on Monday. SQM reports on Thanksgiving Eve, Nov. 23.

CEO Pierre Brondeau said on the analyst conference call that the company does not see any notable improvement with respect to the oversupply of omega-3 in the market. He said the company is more in damage-control mode with this business, rather than expecting any growth. That said, the overall segment has been rebounding solidly from last year, as its 52% year-over-year earnings growth shows.

The lithium segment's revenue and earnings soared thanks to higher prices, improved product mix, and lower operating costs in part resulting from the devaluation of the Argentinean peso. (FMC's internal source for lithium is the Salar del Hombre Muerto in Argentina, which it owns. A "salar" is a dried lakebed with an underground reservoir of mineral-containing brine.)

The size of the contribution from each of the drivers of the year-over-year earnings growth is shown in the chart below. For instance, higher prices for the company's lithium products combined with an improved product mix contributed $12 million to earnings as compared with the year-ago period. 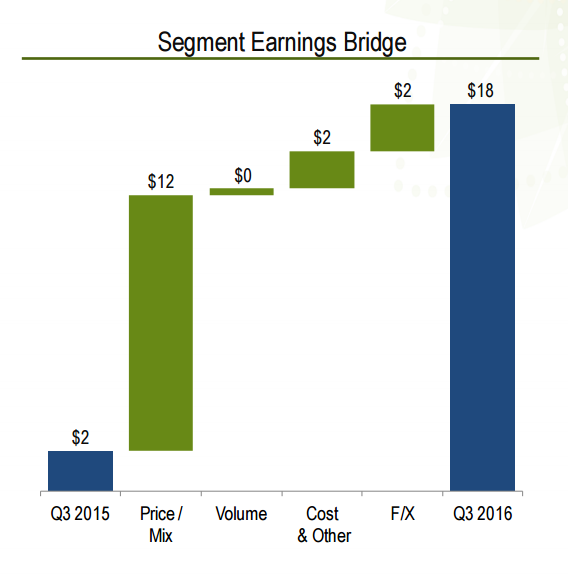 FMC's lithium strategy is to focus on higher-value downstream specialty products. The company, which is very vertically integrated, produces lithium carbonate from the lithium chloride that it extracts from brine and then further refines the carbonate into various other lithium products, including lithium hydroxide and lithium metals.

Brondeau said in the press release:

FMC delivered another strong quarter, reporting adjusted earnings per share above the top end of guidance. Ag Solutions had a solid quarter, particularly in Latin America, reporting segment earnings at the top end of prior guidance. Lithium outperformed, increasing earnings by $16 million compared to the prior year quarter. Lithium's performance reflects the success of FMC's strategy to focus on higher value downstream specialty products. Health and Nutrition delivered strong margins, but revenue was below expectations.

Based on the lithium segment's performance to date in 2016 and its expected Q4 performance, FMC Corp. increased its guidance for full-year 2016 adjusted EPS by $0.06 at the midpoint of the range to $2.76 to $2.86. At the midpoint, this represents year-over-year growth of 13.8%.

Here's the company's full outlook for Q4 and full-year 2016: 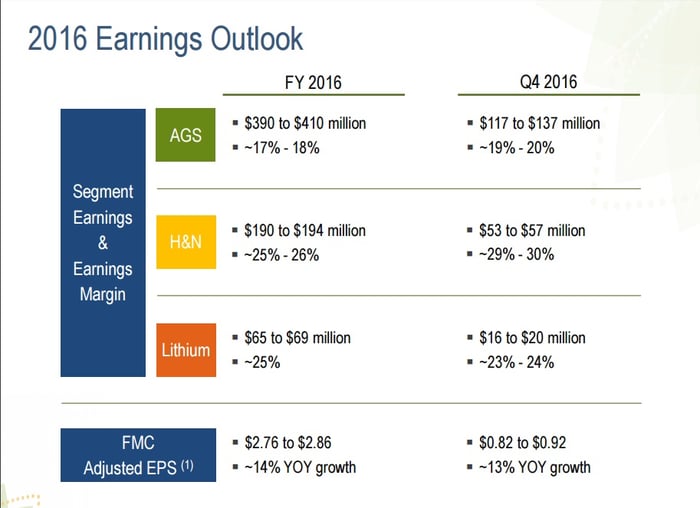