For biotech investors, Biogen (NASDAQ:BIIB) must have seemed like a port in the storm for 2016, with shares posting a modest gain of 4%, compared with the iShares Nasdaq Biotechnology Index (NASDAQ:IBB), which has fallen by a whopping 16% year to date even after the post-U.S. election relief rally. 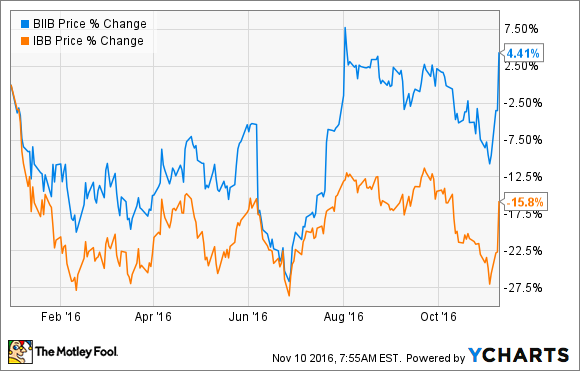 Biogen is undoubtedly the market share leader in multiple sclerosis (MS), with its drugs accounting for 38% of global MS revenue. However, is Biogen's dominance in MS reason enough to hold on to this stock in the face of broader market sentiment that's shifting away from healthcare? I don't believe so. In fact, here are three reasons it might be time for investors to ring the register on Biogen.

McKesson Corporation, one of the largest drug distributors in the United States, saw its stock plunge more than 14% last month, in large part because of growing payer push-back on both generic and brand-name drug price increases. Multiple sclerosis is already the second most expensive specialty drug class, making it difficult to see how Biogen will be able to implement significant price increases on its MS drugs. As if this weren't bad enough, in the not-so-distant future, Biogen could face additional pricing pressure and competition to key MS drug Gilenya from a generic version marketed by Novartis (NYSE:NVS). Last year, the U.S. Patent Trial and Appeal Board invalidated Gilenya's 2026 formulary patent in response to two separate challenges from generic-drug makers. Without novel intellectual property, Gilenya will go generic in 2019. Loss of pricing power combined with an inevitable decline in prescription volume should have Biogen investors nervous about the company's MS franchise.

In addition, Biogen will soon face increasing competition from new branded entrants within the MS space. Roche Holdings' (OTC:RHHBY) Ocrevus (ocrelizumab), if approved, could be the first therapy to improve symptoms in both relapsing MS and primary MS patients. Estimates vary, but some see this drug having the potential to treat more than 90% of all MS patients, and analysts estimate sales of $4 billion by 2022. As a once-every-six-months injection, Ocrevus would most likely put pressure on Biogen's Tysabri, which is dosed once a month and has been previously associated with a deadly brain infection.. Biogen is actually eligible to receive tiered royalties from Roche between 13.5% and 24% on U.S. net sales of Ocrevus, but this will not come close to balancing out the loss of Tysabri sales.

Another competitor on the horizon could come in the form of Celgene's (NASDAQ:CELG) S1P receptor modulator, ozanimod. The drug, which Celgene acquired in a 2015 acquisition of Receptos, made headlines in 2014 with the announcement that ozanimod had met its primary endpoint in a phase 2 trial as a treatment for relapsing multiple sclerosis. More importantly, however, within this trial, ozanimod demonstrated a similar adverse event profile to the placebo. Ozanimod therefore has the potential for best-in-class safety. As a once-daily oral, ozanimod would most heavily compete with Biogen's Tecfidera. While estimates vary, Celgene's management has projected peak sales of ozanimod between $4 billion and $6 billion annually.

In response to the growing threat of new entrants on the horizon, Biogen's management has decided to make the equivalent of a hail-mary pass with moonshot Alzheimer's disease (AD) candidate, aducanumab, a monoclonal antibody that targets "amyloid plaques," which are believed to be one of the causes of AD. Biogen made headlines last year with the announcement that in a phase 1b study involving 166 patients with mild forms of AD, three out of four dosage levels of aducanumab led to statistically significant reductions in amyloid plaques compared with placebo after 26 weeks.

So we know that aducanumab is effective in breaking down amyloid plaques. However, we don't even know for sure if amyloid plaques are the root cause of AD. In fact, other amyloid-busting therapies have failed to provide a clinical benefit in the past. The combination of Biogen's lack of experience in AD with the fact that AD therapies have had a 99% failure rate over the last decade doesn't make me optimistic regarding aducanumab's chances. Regardless, investors will have to be patient, as Biogen's phase 3 trials for aducanumab won't produce top-line data until at least mid-2020.

Biogen plans to spin off its hemophilia franchise, which accounts for around 7% of sales, into an independent company called Bioverativ. After this launch in early 2017, Biogen will effectively be a pure-play MS stock. Taking into account the considerable headwinds to pricing power and increased competition within the MS space, that may not be a good thing. While Biogen is likely to remain top dog in MS for a while to come, I believe there are probably better options for the enterprising biotech investor. Although an aducanumab approval would undoubtedly be a game changer, data from phase 3 trials is still years away. In the meantime, after a decent year so far, I think it might be time for investors to ring the register on Biogen.