Royal Dutch Shell plc (NYSE:RDS.A) (NYSE:RDS.B) is one of a small collection of international energy giants. That group, which includes companies like ExxonMobil (NYSE:XOM) and Chevron (NYSE:CVX), as a whole, is thought of as oil companies. But over the past few years, Royal Dutch Shell has taken steps to tip the balance toward natural gas, a key difference investors need to know about. 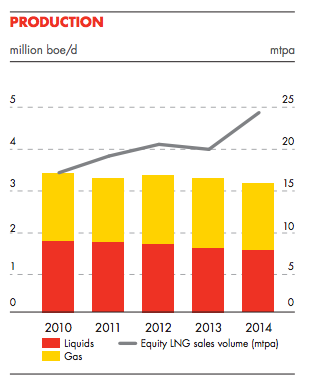 Royal Dutch Shell has been a big player in natural gas for a long time, with a specific focus on liquefied natural gas. That's the fuel that's increasingly being used in electric power plants because it's cost competitive with coal and cleaner burning. In fact, as the graphic shows, the oil-to-gas mix at the company has hovered around 50/50 or so for some time.

Bigger now and in the future

It's really not that different today, even after the roughly $50 billion the energy giant spent buying BG Group in early 2016. But that's really only half the story. The bigger picture is what matters here, and Shell has basically doubled down on its natural gas bet. Indeed, if you look at where Shell stands relative to the other integrated energy giants, you start to see a very different picture emerge.

For example, Exxon and Total (NYSE:TOT) are the only energy majors anywhere near close to the oil/gas split that Shell has. And Chevron is a notable laggard. That makes Shell the best way to gain exposure to a balanced mix of oil and natural gas, if you want to hedge your fuel bets in the energy space. 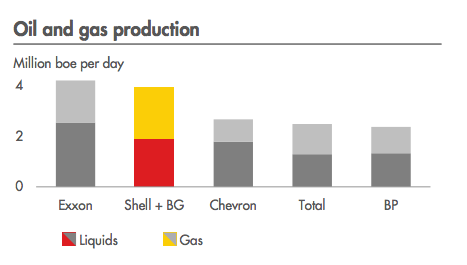 But there's still more to this story. That's because Shell's liquefaction of natural gas capacity is materially greater than any of its peers. And with BG in the fold, that capacity is expected to grow even faster out to 2018, further widening the gap. Here, Chevron is currently the laggard, but it, too, is building capacity. By 2018, it should be the third largest player after Shell and Exxon, leaving BP (NYSE:BP) as the smallest player. 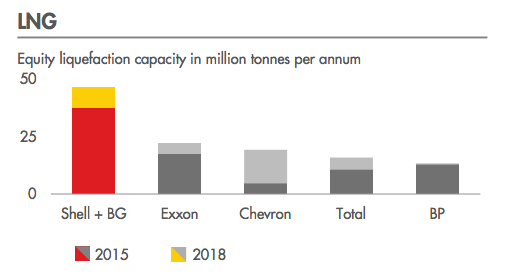 As with all investments, the real story here is about the future. And it's pretty clear that Royal Dutch Shell is getting ready for a future that's focused more and more on natural gas. While it was already the biggest in the space, the BG deal pushed it even further down the natural gas road. It's a big change that will clearly help determine the company's future and investors' future returns.

Industry watchers might rightly counter that Shell's LNG assets are among the most expensive around. Shell is well aware of the problem, with CEO Ben van Beurden explaining to an audience earlier this year that innovation and standardization will be key to keeping costs down longer term. Essentially, Shell is learning from its building efforts to help improve its future costs. But, more to the point, not only do low gas prices force money saving innovation, they also increase demand--something that can increase throughput at Shell's facilities or, even better, lead to higher prices if demand outstrips supply.

And on that score, there's a compellingly bright outlook from the International Energy Agency. This global energy watchdog expects demand for natural gas to increase by nearly 50% by 2040, while oil demand is only expected to grow around 12% or so. If gas demand comes even close to that outlook, Shell's move to double down on natural gas with the BG purchase will have positioned it perfectly for stronger results down the line.