Shares of Diana Shipping (NYSE:DSX) and its sister company Diana Containerships (NASDAQ:DCIX) are down 14.5% and 54.4%, respectively, today as of 1:30 p.m. EST, after the two companies announced earnings that didn't quite meet analyst expectations. It should also be noted that whatever mystery has been causing the large moves in dry bulk shipping stocks recently has had a profound impact on these two companies' shares and is likely exacerbating today's news.

Dry bulk shipping stocks have had a few things going for them the past few months. First, the Baltic Dry Index has been on the rise for 10 months, and rumblings that China may start increasing its imports of commodities such as iron ore have given some hope to dry bulk shippers. The event that really sent shares of dry bulk shippers in their rapid rise was the U.S. election, and the ensuing speculations of a massive infrastructure-spending program under President-elect Donald Trump. This market euphoria had given shares of Diana Shipping and Diana Containerships an incredible rise. 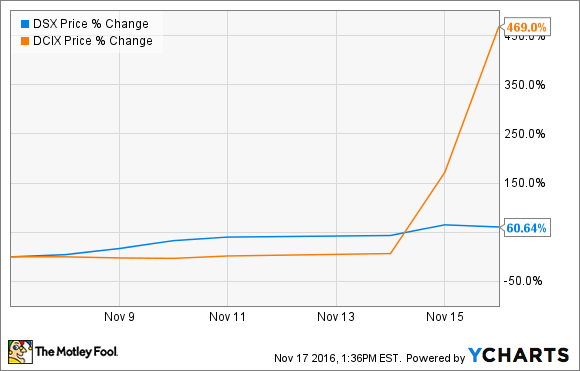 But it appears that today's earnings release took a lot of wind out of their sails as results didn't quite meet expectations. Diana Shipping posted a per-share GAAP loss of $0.99 that included a $50 million impairment of its investment in Diana Containerships. The sister company posted a GAAP per-share loss of $13.84. Both companies also failed to meet consensus analyst estimates for revenue as well.

Tack on the recent stock-price chaos related to other dry bulk shippers and you get a recipe for some very large stock-price declines.

Clearly, the market for shipping stocks is a wild, wild one right now. So wild, in fact, that any long-term investor should probably avoid this industry altogether. Ever since the Chinese commodity bubble burst in 2011, shares of Diana Shipping and Diana Containerships have been on an epic slide as the two companies have posted a long string of disappointing earnings results. 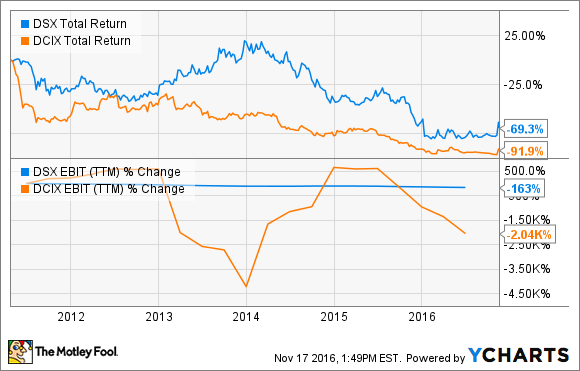 Perhaps the market for dry bulk shipping is on the rise, and perhaps the market for container vessels will improve as Hanjin Shipping's bankruptcy will alleviate the overcapacity crisis. But even if these scenarios were to play out, Diana Shipping and Diana Containerships are still dealing with huge debt loads, and their ability to meet their financial obligations is questionable. As these two shipping stocks stand today, both are too speculative for a long-term investor to touch.