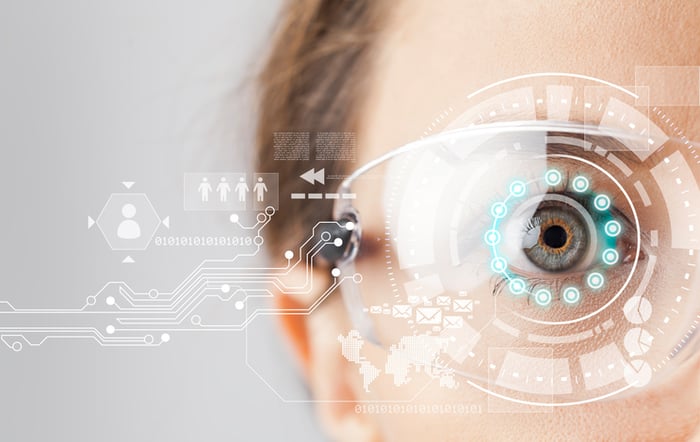 Apple (NASDAQ:AAPL) is quite interested in augmented reality (AR). This we know.

Furthermore, CEO Tim Cook has made it abundantly clear that the company is far more interested in AR than virtual reality (VR). In Cook's opinion, AR has much broader potential that can affect mainstream consumers, while VR looks like it could remain a niche for the foreseeable future. The Mac maker is also reportedly toying around with the idea of smart glasses as a way to deliver an AR experience while further expanding into the nascent wearables category. Well, Apple may have another idea up its sleeve.

Earlier this week, Business Insider reported that Apple is looking to integrate AR technology directly into the iPhone's camera app, according to an anonymous source. Apple has acqui-hired a good amount of AR talent recently, and these engineers are leading the initiative. Apple wants iPhones to be able to recognize objects in real time, which means that Apple would have to either build or license a database of 3D objects, according to the report. Facial recognition would also be an important function, which would have obvious use cases like recognizing the user for greater personalization or enabling social experiences.

BI's source says that once refined, Apple may look to release the underlying technologies as software development kits (SDKs) for developers to utilize, providing a foundation for further third-party innovation.

Two go-to-market strategies are better than one

Integrating AR into the iPhone would potentially be a stepping stone as Apple continues evaluating the prospect of smart glasses. Naturally, there would be a lot of overlap in the underlying technology. If Apple develops some useful AR tech for the iPhone, it would presumably be easy to repurpose and repackage that tech into smart glasses with minimal effort. By potentially adopting two different go-to-market strategies, Apple is also hedging its bets and reducing the likelihood of failure and wasted research and development investments.

The thing about AR on a smartphone is that it's been done before. One of the earliest AR apps was released way back in 2009. It was a public transit app that allowed users to lift up their phones and see transit routes and find bus or train stations. Around this same time, Yelp even added an AR feature called Monocle to its app, allowing users to find local businesses through an AR interface. Since then, interest in AR waned as the uses were fairly limited and the novelty wore off.

But then Pokemon Go happened, and reinvigorated interest in AR. For instance, Cook and Piper Jaffray analyst Gene Munster had this exchange on the July earnings call:

Tim Cook: In terms of AR and the Pokemon phenomenon, it's incredible what has happened there. I think it's a testament to what happens with innovative apps and the whole ecosystem and the power of being a developer being able to press a button, so to speak, and offer their product around the world. And just a certain developer has elected not to go worldwide yet because of the pressure on their servers, et cetera, because of the demand. But I'm sure that they will over time.

It also does show, as you point out, that AR can be really great. And we have been and continue to invest a lot in this. We are high on AR for the long run. We think there are great things for customers and a great commercial opportunity. And so we're investing, and the number one thing is to make sure our products work well with other developers' products like Pokemon. And so that's the reason why you see so many iPhones out in the wild right now chasing Pokemons.

Gene Munster: Would you say there's going to be a computing shift to AR longer term?

Cook: I notice there are people that want to call it a new computer platform, and we'll see. I think there's a tendency in this industry to call everything new the next computer platform. However, that said, I think AR can be huge. So we'll see whether it's the next platform. But regardless, it will be huge.

It's likely that the early wave of AR apps was premature, both in terms of technological capability and interest. Now that AR and VR and starting to gain some traction, Apple is placing its bets accordingly.