Cable cutting has wreaked havoc on the traditional paid-television industry, and Discovery Communications (NASDAQ:DISC.A) has been no exception. The global multichannel network has been investing in digital distribution, but those investments have yet to gain traction.

Finding space in the media world

Discovery Communications has carved out a niche for itself in the media industry by providing television edutainment content spanning non-fiction, science, history, and lifestyle. The company boasts a reach of 3 billion viewers spanning over 220 countries.

In the station lineup is the namesake Discovery channel, but also in the stable are TLC, Animal Planet, and joint ownership of OWN: Oprah Winfrey Network. The marquee channels are distributed to over 91 million households in the U.S. Internationally, the company offers an average of 10 channels in each market and has programming in 45 languages via 352 different media outlets.

Expanding its networks into international markets has provided strong growth for Discovery Communications in years past. Over the last decade, the company has grown revenue and profits as it has added subscribers through cable and satellite subscriptions both in the U.S. and abroad. 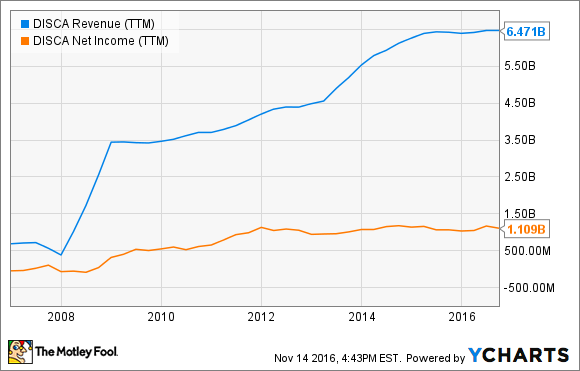 While the company has done extensive work diversifying both its media offerings and where it does business, making the shift to the new digital distribution world has been a different issue. The expanding viewership tailwind has run its course and has now been replaced with several headwinds the company is still working on an answer for.

How Discovery is handling millennials

Discovery has run into similar issues as Disney's ESPN networks have had: a new generation of consumers cutting their cable or satellite TV subscriptions and opting for online streaming options instead. The company reiterated its strategy on the last earnings conference call to get content on as many screens as possible and fill in the gaps with digital-only content when necessary.

The company was late to address the online TV issue, but last year, it started allowing cable and satellite subscribers to watch content online from the Discovery GO app. A year ago, management reported that only 20% of U.S. cable subscribers had access to the platform from their TV provider. At last report, that figure had bumped up to 70%.

An encouraging stat the company has learned is that half of the users of the app are a younger audience, between the ages of 18 and 34. That at least indicates that the company's content is relevant to younger consumers, but it hasn't yet helped the network return to growth.

More offerings outside of traditional paid-TV subscription services are needed, though. To that end, Discovery recently announced it was launching a joint venture to accelerate the move of its Eurosport channel to an online format. Eurosport is the largest sports program distributor on the European continent. The company sees the new investment as an opportunity to create a direct-to-consumer Netflix-like service for sports in Europe.

In a similar deal, Discovery also launched another joint venture to create a new digital-only media holding company called Group 9. The new digital content and social media video provider will have an estimated 3.5 billion monthly video views at inception. Discovery will have 39% ownership with the option to purchase the whole entity outright.

The company's investments have eaten into profits in the short term, with earnings per share dropping 16% last quarter. A stronger U.S. dollar and lower advertising income has also taken a bite out of revenues as of late. But through the first nine months of 2016, the top and bottom lines are up 1.6% and 16% from last year. 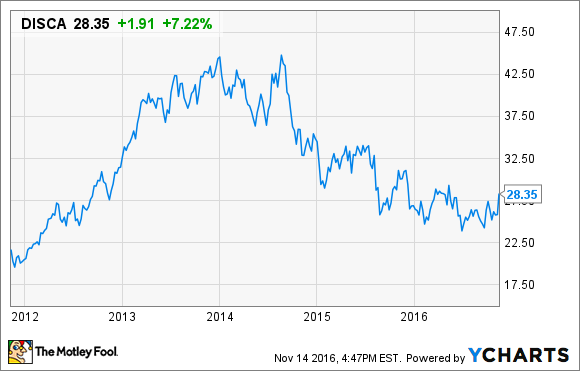 It could take some time for Discovery's new initiatives to begin paying off, but the company is investing to stay relevant in an online streaming world. With shares down steeply from all-time highs, the stock has a trailing-12-month price-to-earnings ratio of 15 and a forward-12-month ratio of only 12. It looks like it's time for investors to keep an eye on Discovery Communications shares as the company begins a digital transformation effort.