Over the past three months or so, Ferrellgas Partners, L.P. (OTC:FGP) units are down roughly 60%. As you might expect, the news that led to that drop is pretty bad, which is why now might just be the perfect time for investors to jump in and buy shares of the propane-focused limited partnership. Here are three reasons to consider stepping into this abyss.

1. The damage is done

The first thing you need to consider about Ferrellgas is the most recent news. The biggest negative was the announcement that the distribution could be cut from $2.05 per unit annually to just $1.00. That's a more than 50% cut, but with the near-60% price drop, it looks like that bad news has likely been priced in by the market.

The other news released along with the partnership's fiscal 2016 earnings wasn't great. Essentially, Ferrellgas' push into the midstream sector has been a bust, with the loss of a major customer. That forced the partnership to write down the assets it had only just purchased, led to the ousting of the CEO who orchestrated the midstream push, and left Ferrellgas in the unenviable position of paying down debt to avoid violating its debt covenants.

However, like the distribution cut, this news is in the market and likely priced fully into the units. That offers investors a chance to buy in at a low price, assuming they can stomach the turnaround efforts over the next few years. 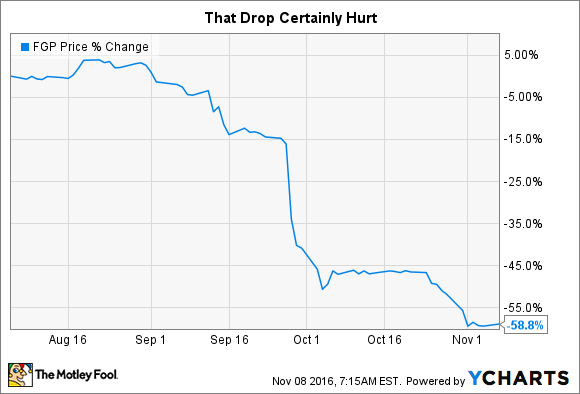 2. They got your back

The next big reason to like Ferrellgas is insider ownership. The partnership reinstated the founder and chairman of the board, James Ferrell, as the interim CEO. Chances are, he's only going to be in that position for a limited amount of time, but here's a fun fact: Ferrell owns 5% of the partnership's shares. He has a vested interest in seeing Ferrellgas, his namesake company, turn itself around.

Meanwhile, Julio Rios, who heads the company's midstream business, owns roughly 1.1% of Ferrellgas' units. While turning the midstream business into a profitable operation, or finding a way to get out from under it, is his job, he clearly has a big stake in the overall company, too. And that means he's incentivized to do the right thing for Ferrellgas and its shareholders.

But wait, there's more. The partnership also has an employee stock ownership plan, or ESOP. And it's pretty big: The ESOP owns roughly 23% of the company's units. Every single employee, then, has a vested interest in seeing Ferrellgas turn its business around, with some of the biggest names at the company having even more skin in the game. This is a partnership where the employees are truly aligned with shareholders.

The last reason to consider buying Ferrellgas now is that the "fix" for the partnership's problems is really more of a back-to-basics thing than anything else. For example, the issue that's likely to lead to a distribution cut is too much debt. Well, the answer to that is simply to pay down debt. The company's cash cow propane business, which is mostly performing just like it always has, should get that done in time. (Yes, it may take a little while, so you'll need to be willing to stick it out for a while.)

Once debt is again at manageable levels, though, the distribution is likely to be increased again. And if you look back at the partnership's long history, it has paid distributions every quarter since it went public in 1994. The vast majority of those quarterly payments have been $0.50, or $2 a share per year. In fact, the first distribution hike in the partnership's history came in August of 2015, bringing the payment to $2.05 per share per year. That was when expectations were high for the midstream business. 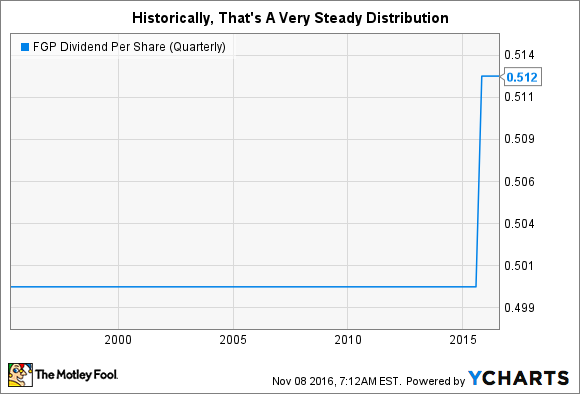 However, once the company works through its debt troubles, and with such significant insider ownership, it's highly likely that getting back to basics will eventually lead the distribution back to the old annual $2.00 per unit level. So, there's every reason to believe the upside for the distribution after the cut is fairly large.

The fly in the ointment is what to do with the midstream business, which is now worth far less than what Ferrellgas paid for it. That said, the partnership has already written down roughly 70% of the value of its big purchases in the space. That painful writedown should take care of a huge piece of the problem, even though it remains the open-ended question to watch. And don't forget investors are already discounting the value of that division based on the share price decline, so the future downside from troubles here is probably limited. And if the company can turn the business around, or sell it, a huge weight would be lifted off of the shares.

Essentially, Ferrellgas is a turnaround story where the bad news is pretty much all out in the open. And the fix isn't hard to figure out: Get back to basics, and pay down debt. Moreover, insiders, including every single employee in the company's ESOP, have a huge vested interest in seeing the company get back on track. It could take a couple of years, but this is probably going to be the most pessimistic moment for the partnership, which means it might just be the best time for investors to step in.