Home Depot (NYSE:HD) is one of just four Dow stocks that's trading lower so far in 2016. The retailer's business, though, continues to set new highs across a wide range of operating and financial metrics. Below are a few of the figures that stood out from the company's just-closed third quarter.

5.9%: Home Depot's most closely watched metric is comparable-store sales, and this quarter marked an acceleration of growth. Sales at existing location rose by nearly 6%, compared to 5% in the prior quarter. Rival Lowe's (NYSE:LOW), by contrast, only managed a 3% comps uptick.

3.1%: The company didn't enjoy much of an uptick in customer traffic this quarter, as the growth pace held steady at about 2%. Home Depot is on track to slow significantly this year from the 4% traffic gains it enjoyed over each of the past two fiscal years. However, average spending per customer jumped 3% in the third quarter, which made all the difference. Big transactions, those valued at $900 or more, surged 11% as the company continued to make market share gains with pro customers.

5.6%: E-commerce sales rose 17% and now account for just under 6% of Home Depot's business, far more than many other national retailers. Target's (NYSE:TGT) comparable metric, for example, is 3.5%. Home Depot has made aggressive bets on this sales channel over the past few years and plans to continue investing heavily on raising its game. Its major initiative over the next few months will be the rollout of its buy-online, ship-from-store functionality.

14.5%: Home Depot's profits are growing at a much faster clip than sales. As a result, profitability just touched a new high, with operating margin reaching 14.5% over the past nine months. Compare that to Lowe's 8%, or Target's 7%. 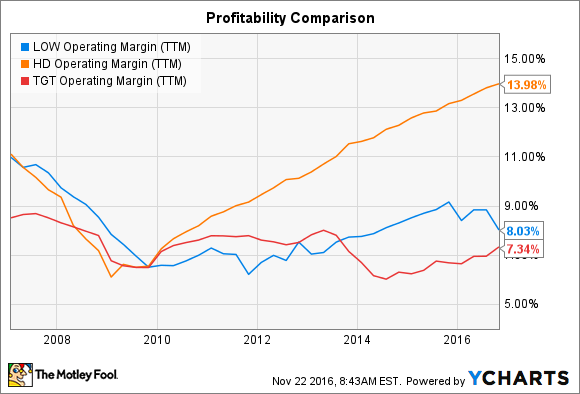 $7 billion: After hinting at the idea over the last few quarters, executives finally decided to boost Home Depot's 2016 share repurchase spending target to $7 billion from $5 billion. The company has plenty of cash to fund the move, but management instead chose to take advantage of historically low interest rates to take on an extra $2 billion of debt.

The aggressive share buyback trend has supercharged profit growth for investors: Per-share earnings spiked by 19% this quarter even though total net earnings rose by 14%.

$2.6 billion: Home Depot has paid $2.6 billion in dividends over the last nine months, compared to $2.3 billion over the prior-year period. For the full year, the figure should easily pass $3.5 billion, or more than it generated in total net earnings just five years ago. That's a testament to the retailer's market-thumping profit growth and unusually generous dividend policy.

$7.9 billion: Operating cash flow is up to nearly $8 billion over the past nine months from $7.4 billion last year. That gushing fund source provides plenty of ammunition for investments in the business, as well as for capital returns to shareholders in the form of dividends and stock buybacks.

29%: Home Depot's return on invested capital, a critical measure of management efficiency, surged by 3 percentage points to reach 29% of sales. That's enough to put the company in second place among the 30 members of the Dow, just behind Boeing and its 34% ROIC.

5%: The company affirmed its full-year sales outlook that calls for 5% higher comps, implying continued market share gains against Lowe's, whose management projects roughly 4% comps over the same period. The fourth quarter will likely be Home Depot's toughest of the year, but mainly because it is up against such a hard comparison against the prior-year period. Last year's final quarter was marked by the warmest December on record, which helped the company book an incredible 9% comps improvement.

If you're squinting to look for bad news in this report, you might focus on Home Depot's slowing customer traffic trends that imply an end to its heady days of 4% annual growth. Yet the company is still soaking up market share, and its overall report is packed with about as much good news as a shareholder could hope for from one of the nation's largest retailers.