Connected-device maker Digi International (NASDAQ:DGII) stock jumped nearly 50% in the first few weeks of November. A trifecta of positive news items sent shares steeply higher before they leveled out around $13.50. Here are the current happenings at Digi that investors need to know about. 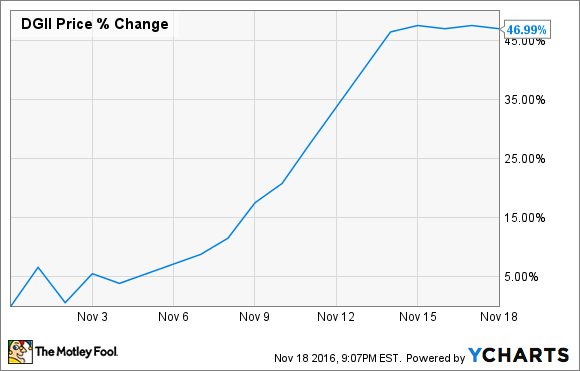 At the end of October, Digi International released another positive earnings report. The company has been in an ongoing effort to improve its profitability, and share prices have been recovering from their big dip at the start of the year as a result.

Profit was up 29% in the most recent quarter compared to the year-ago period and was up 154% over all of fiscal 2016 compared with the previous year. The company has been trimming costs by streamlining business operations to unlock the extra profit. The last year caps off a strong multiyear increase in the bottom line. 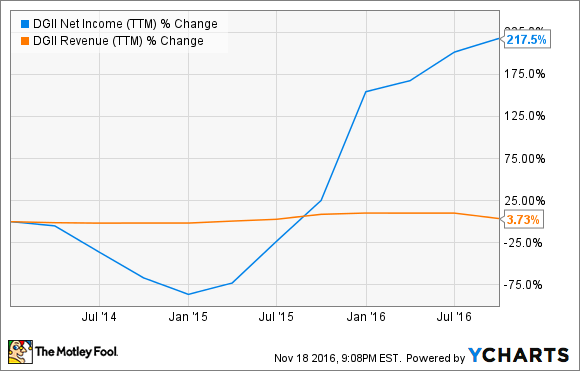 On the conference call in late October, CEO Ron Konezny said that the company is continuing to transition to a strategy focused on sales growth. That is welcome news, as revenue has been mostly flat in the last few years even as profits have been climbing.

In keeping with the statement that sales growth is the strategy, the company hired a new president of global sales and has been introducing new connected hardware platforms. Then, five days after the earnings release, Digi announced it had acquired IoT company FreshTemp, which will expand on Digi's offerings in the connected and digital food monitoring industry.

The business will be added to the small but growing Digi Honeycomb food monitoring service as the company looks to expand on recurring revenues. As of last quarter, over 96% of Digi's revenues still came from inconsistent product sales versus more stable ongoing service fees.

A political shakeup and a purchase offer

Digi's stock really started to take off after the acquisition announcement and rose as markets climbed following the U.S. presidential election. Then shareholders received another positive surprise when diversified signal transmission company Belden (NYSE:BDC) offered $13.82 per share in cash to acquire Digi.

Belden announced its offer after market close on Nov. 11 and the next day, Digi shares spiked to about where they are now. Digi's board of directors rejected the offer, stating that the proposal "significantly undervalues Digi and its future growth prospects ... and the Digi Board and management are confident in Digi's stand-alone prospects."

Belden has spent $2.8 billion on smaller tech companies since 2007, and the company thinks Digi's connected-device business would be a good fit with its own industrial IT segment.

Even though Digi's board rejected Belden's offer, the prospect of having a deal go through with Belden is helping Digi's recent gains hold. Belden originally made the offer in private, but took it public after the board's first rejection, which resulted in a second rejection from the Digi board.

"Belden is disclosing the contents of its letter in order to inform Digi’s shareholders of the opportunity to realize a significant premium and the compelling strategic fit inherent in a combination of the two companies," Belden wrote in a Nov. 11 press release.

But investors could see shares reverse course in the short term if nothing pans out. Although the optimism from Digi's board of directors about remaining a stand-alone company is a nice vote of confidence for the company's future, the recent appreciation in price was partly caused by the premium offer over and above recent share values. At any rate, given Digi's ability to increase free cash and begin making acquisitions of its own, the long-term prospects for the company look bright.

On the other hand, if Belden is serious about its interest and gets its way, a higher offer for shares could be coming. Either way, current Digi International shareholders have reason to be excited about their company.