If you're looking for new stock ideas to put on your watch list, a great strategy is to take a look at what hedge fund managers are buying and selling. Of course, not every hedge fund does well, and success can swing wildly year to year, but there is value in being able to see the number of funds buying or selling a stock, as well as which stocks are at the top of funds' holdings.

With that said, it's pretty clear that hedge fund managers are starting to like CarMax, Inc. (NYSE: KMX) more and more.

Markel Gayner Asset Management even has CarMax as its largest position at 6.75% of the entire portfolio. Akre Capital Management also has a large 5% stake in the company, and the auto retailer was one of only two stock picks in the fund's top 10 to not have a declining position after the most recent quarter. It's apparent more managers are jumping into CarMax, and many have significant positions, which is certainly a bullish theme.

Are they right about CarMax?

There is certainly reason to be bullish on the company's growth story as the business continues to open its doors in new markets. CarMax increased its store base by 10% during fiscal year 2016, and at the end of September there were 165 used car CarMax stores in 83 markets in 38 states. But that footprint reaches only 65% of the U.S. population, which suggests there's definitely room to add stores in the foreseeable future. The company's financial story has been impressive as well. 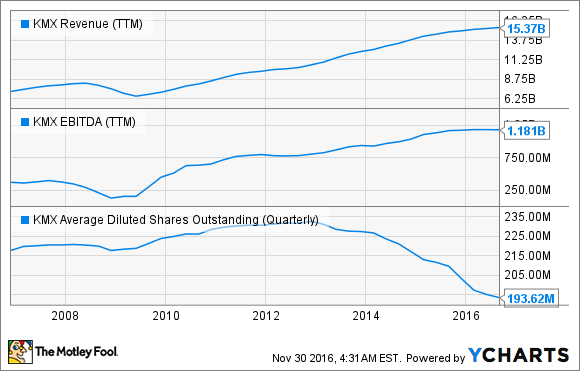 Through fiscal year 2016, CarMax's 10-year compound annual growth rate (CAGR) for revenue was 9.2%, and its earnings per share CAGR checked in at an impressive 17.4%, thanks to the decline in outstanding shares shown in the graph above.

One thing that many investors overlook is the power of CarMax's pricing knowledge. The company has retailed roughly 6 million vehicles and appraised nearly 24 million -- its sales data goes back to 1993, and that's information competition can't match. Also, the automotive retail industry is extremely fragmented, and CarMax can leverage its size and scale to drive profitability or become more competitive with prices to increase sales.

One risk that investors would be taking with CarMax is simple: Despite the growth story, it operates in a cyclical industry and isn't immune to economic downturns. Couple that with the fact that a wave of vehicles coming off-lease within a couple of years could drive used car prices lower and pinch margins. It's also possible that as new-vehicle sales plateau in the U.S., retailers might expand their business into the used-car market in an attempt to stoke financial growth. That would create more competition -- there are a handful of dealership groups, such as AutoNation (NYSE:AN), that could rival CarMax's scale.

Ultimately, with the risks noted above, CarMax isn't foolproof, but billionaire hedge funds are buying into the growth story, and the stock has earned a spot on investors' watch lists, at the least.