Shares of California Resources (NYSE:CRC) went ballistic in November, bouncing after it reported solid third-quarter results, then bounding higher when renowned investor George Soros disclosed a stake in the company. That said, the news that sent the stock off to the races was OPEC's announcement at the end of the month that it has agreed to cut its output: 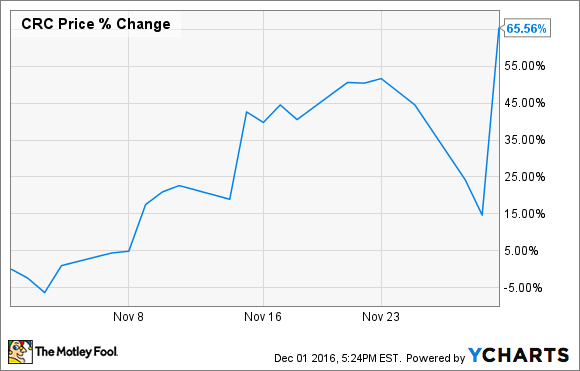 California Resources started the month with the release of its third-quarter results, which showed several important signs of improvement. While the company reported an adjusted net loss of $71 million, or $1.75 per share, that was better than its year-ago adjusted loss of $86 million, or $2.25 per share. Driving that improvement was the fact that the company was able to keep its oil production flat from the prior quarter while also pushing production costs down 14% year over year. In addition to that, the company announced several significant balance sheet achievements, including generating $88 million of free cash flow, while reducing net debt by $625 million as a result of a cash tender offer for debt at a discount. Furthermore, its banks concluded their semi-annual review of the company's credit facility, resulting in the reaffirmation of its borrowing base at $2.3 billion, which gives California Resources ample liquidity. These actions showed that the oil producer made solid progress to improve its financial situation.

Those achievements did not go unnoticed. That was evident after a SEC filing revealed that famous investor George Soros recently bought shares in the company. While it was a small position for Soros, it shows his confidence in the company as well as in the energy sector. In fact, he bought stakes in eight energy-related companies during the quarter, including natural gas producer Rice Energy (NYSE: RICE) and pipeline giant Williams Companies (NYSE:WMB). His largest purchase was more than 3 million shares in Williams Companies, which like California Resources has spent the past few months repositioning for future success. It is pretty clear that Soros is taking a directional bet on the energy sector given that each of these companies operate at different points along the energy value chain.

The biggest catalyst driving California Resources' stock last month was OPEC's decision to cut its output. That deal should not only put a floor under crude prices but potentially lead to higher prices in the near term. That is just what the company needs right now given that it has just started increasing spending to boost its oil and gas activities. Because California Resources plans to match spending with cash flow going forward, it has the potential to spend at a higher rate in the future should oil rise and take its cash flow with it.

California Resources needed OPEC's intervention in the oil market more than most other U.S. oil companies because of its high debt level and the fact that it does not have a low-cost, high-return shale position to drive growth. That is why its stock rocketed higher on OPEC's agreement, which if it works in boosting oil prices, could really help the company by accelerating its ability to reduce debt and grow production.