Well timed, but too small

Alphabet's third-quarter announced repurchase program isn't its first. It follows a $5.1 billion repurchase program initiated in the third quarter of 2015. Interestingly, a review of how this program fared can provide some useful insights for the new program.

The first thing to note about Alphabet's $5.1 repurchase program is that it was well-timed. Share repurchases have the biggest positive impact when they are executed at a lower stock price than where shares end up later on. Fortunately, Alphabet was able to purchase its shares at a discount with its $5.1 program. The stock is up about 20% since Alphabet started repurchasing shares. Further, since about half of this gain came after Alphabet had already exhausted its authorized $5.1 billion repurchases, the timing of the program was particularly keen.

But because $5.1 billion is hardly a large sum given Alphabet's $521 billion market capitalization, and adding in the fact that Alphabet was averaging over a billion dollars every quarter on stock-based compensation, the net effect of these repurchases were more preventative than accretive when it came to reducing total share count. 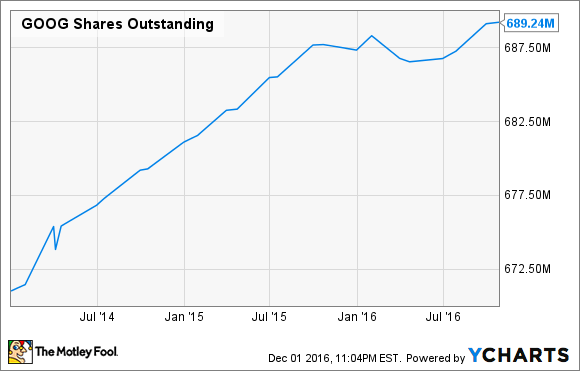 While Alphabet's new repurchase program is larger, it arguably doesn't represent the jump investors should be hoping for. Like its $5.1 billion program, the $7 billion program will likely also fail to reduce Alphabet's total share count, and it may even fail to fully take advantage of an opportunistic period.

And looking beyond the simple fact that Alphabet's share repurchase program isn't likely big enough to help reduce its share count, it's also arguable that Alphabet is simply hanging on to too much cash. In its most recent quarter, Alphabet's cash and cash equivalents hit $83 billion, up 14% from its $72.8 billion in the year-ago quarter. Further, the search giant is generating significant free cash flow, or cash from operations less capital expenditures, every quarter. In its third quarter alone, Alphabet raked in $7.3 billion in free cash flow.

The big question mark with Alphabet's new $7 billion repurchase program -- or any repurchase program for that matter -- is whether the timing of purchases will be right. While I'd personally argue that Alphabet's shares are still undervalued, a sell-off in the overall stock market, a recession, or unexpected competitive headwinds, could drive the stock lower and render Alphabet's conservative repurchases today great decisions in hindsight.

But considering Alphabet's incredible lead in online search, paired with the company's heady cash flow, I'd bet investors would benefit more from an even larger repurchase program.

Maybe Alphabet's decision to repurchase $7 billion this time around instead of $5.1 billion is the beginning of a trend that could turn into more aggressive repurchases down the road. But will Alphabet have missed a great opportunity by then?