TerraForm Power Inc (NASDAQ: TERP) reminded investors why they are seeing heavy interest from potential acquirers on Tuesday November 29, 2016 . The company released a new investor presentation that included 2016 operating projections and an update on the company's plan to become independent. While the news is positive overall, shareholders are still wondering when their dividends are going to be reinstated. Fortunately, as we found out on Tuesday, they have strong cause for optimism.

Assets are Performing as Expected

While Terraform Power has had to deal with many complications surrounding their relationship to bankrupt sponsor SunEdison, this has not had much of an effect at the plant operating level. The 3 Giga-Watt fleet has produced in-line with expectations at the start of the year, with adjusted revenue expected to be between $697 million to $712 million for 2016, compared to the $716 million projected last fall.

The company projects the midpoint of 2016 adjusted EBITDA to be about $525 million, and will be making about $281 million of interest payments. In normal circumstances, the company's cash available for distribution (CAFD) would be roughly 80-90% of EBITDA less interest payments, or around $207 million. This would easily cover Terraform Global's last paid annual dividend rate of $1.40 per share, but unfortunately the company has had to incur many additional expenses as a result of SunEdison's bankruptcy.

The Company is on Track to Become Fully Operationally Independent

Terraform Power's presentation also highlighted the fact that they are close to achieving complete operational independence from SunEdison. This is expected to occur in January 2017, and includes the implementation of a stand-alone IT infrastructure and a plan to directly employ all key personnel by the beginning of 2017. The company is also bringing on 3rd party service providers for their ongoing project operations and maintenance expenses. 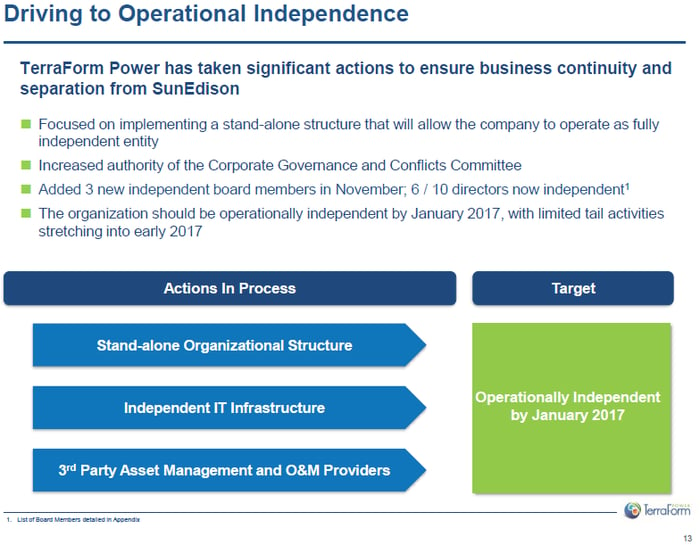 The end goal of all of these moves is to remove any need to rely on SunEdison for support, something which they have struggled to provide for close to a year. Terraform Power also needs to file up to date financials by March 2017 in order to meet NASDAQ's extended deadline for remaining complaint under the exchange's regulations. At this point, management seems confident that they will meet this deadline.

While management is showing a clear path to reaching compliance with NASDAQ in March, Terraform Power has an earlier deadline with its creditors, which could declare a technical default if the company does not provide up-to-date financials by December 6th. With the deadline looming, the company is negotiating with creditors for a 2nd waiver of the deadline. The previous waiver, which occurred at the end of August, required the company to increase bondholders' interest rate by 50 basis points. Its possible a new waiver would come at the same price.

Terraform Power is also exploring a sale. As recently discussed by Travis Hoium, renewable energy giants Brookfield Renewable Partners LP (NYSE:BEP) recently made what can be considered a low ball offer of $13 per share. Investment manager D.E. Shaw has also been in ongoing discussions with management to either buy the assets or perhaps replace SunEdison as sponsor. It's possible that either or both companies also own a portion of the bonds and may choose to leverage that position to play hardball.

Shareholders Hoping for an Ideal Outcome

While big names are trying to buy out Terraform Power's assets on the cheap, the best long-term outcome for shareholders would likely be for the company to remain publicly traded. Their financials indicate that once they extract themselves from SunEdison's control and legal/reorganization costs stop, the company will be able to cover their current dividend, which yields over 10%. Reaching compliance with NASDAQ in March could also be the catalyst that allows dividend payments to resume again.

Once dividends begin flowing again, common shareholders will also be in-line to receive $0.225 per quarter in minimum quarterly dividend payments for the dividends that have not been paid since March 2016. These payments must be caught up before SunEdison or any new sponsor would receive any dividends on their class B shares.

It's been a long year for Terraform Power shareholders, filled with uncertainty and falling share prices. This latest presentation once again confirms that beneath the stormy surface, the company's operations continue to remain calm and productive. While uncertainty remains, a positive resolution seems to be approaching on the horizon.

Could Terraform Power be Getting Closer to Reinstating Its Dividend? @themotleyfool #stocks $BEP $TERP Next Article
Current