Shares of Organovo Holdings (NASDAQ:ONVO), a small-cap company focused on 3D bioprinting and tissue engineering, rose 11% in November, according to data from S&P Global Market Intelligence. 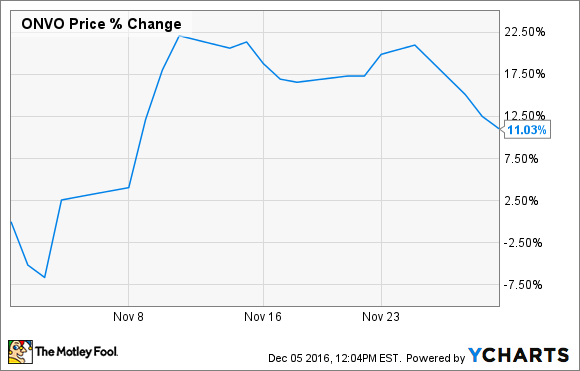 Organovo's shares were off to a good start after the company reported results from its fiscal second quarter. Here's a look at the highlights from the report.

Management also reaffirmed its fiscal-year 2017 outlook in the report, which calls for the following:

Finally, CEO Keith Murphy issued an even more bullish outlook when he presented at the Piper Jaffray Healthcare Conference at the end of the month. Murphy stated that he believes the Organovo will be able to grow at triple-digit rates for years to come.

Add all of the above to the general rally in the biotech sector from the surprise election of Donald Trump, and it is easy to see why shares rose in November.

The prospect of triple-digit sales growth for the foreseeable future is certainly quite exciting. It might not even be all that hard to pull off given the positive start for the company's ExVive Human Kidney Tissue service. With its partnership with Merck and a balance sheet that is flush with cash, no wonder investors are feeling bullish.

Then again, Organovo has always been long on potential, but financial results had always been tepid at best. Even assuming strong growth into next year, the company is only projecting about $5 million in total. With a current market cap that exceeds $330 million, Organovo's price-to-sales ratio is currently in the stratosphere. That could be one reason why the company had to offer a discount on its shares in its recent dilutive offering to drum up enough demand for them.

In total, I continue to believe that Organovo is a fascinating company to watch, but it is far too speculative to warrant an investment. I'd be happy to change my tune once we have a sense for when profits could be on the horizon, but for now, I think that caution is the right move.