There isn't much of 2016 left, which is perhaps a big reason why there have been a flurry of dividend raises lately -- some companies are clearly scrambling to get their lifts in before the close of the year.

It wasn't hard, then, to find three well-known companies upping their distributions. In fact, two of the three are Dividend Aristocrats -- companies that have boosted their payouts at least once annually for a minimum of 25 years running. Here is my chosen troika:

The first of the two Dividend Aristocrats is food industry leader Hormel (NYSE:HRL), which has raised its quarterly distribution by a juicy 17%, to $0.17 per share. This is the 51st year in a row the company has lifted its dividend. 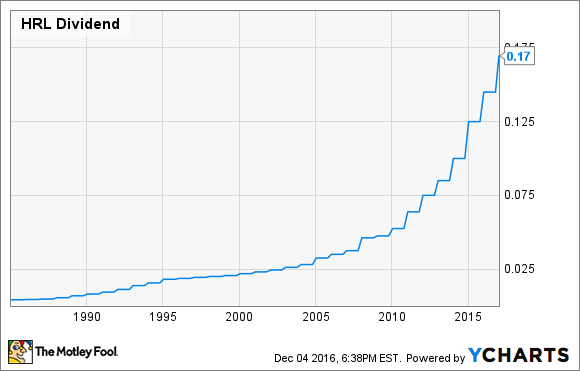 A good trailing quarter and year give plenty of confidence for this. The day after the higher dividend was declared, the company reported its Q4 and full-year fiscal 2016 figures. Quarterly sales advanced by 9% on a year-over-year basis (to over $2.6 billion), while attributable net income rose a very encouraging 30%, to $244 million.

Hormel is guiding for single-digit growth in both top and bottom line for fiscal 2017. The company's free cash flow already provides more than enough dough for dividend payouts and share buybacks, so we shouldn't worry about the sustainability of this new dividend.

The higher distribution will first be dispensed next Feb. 17 to shareholders of record as of Jan. 17. At the most recent closing share price, it would yield 1.9%. That's just under the current 2.1% average of dividend-paying stocks on the S&P 500.

The second aristocrat is sturdy medical equipment specialist Becton Dickinson (NYSE:BDX). Extending its raise streak to 45 years in a row, the company has hiked its quarterly distribution by 11%, to $0.73 per share. 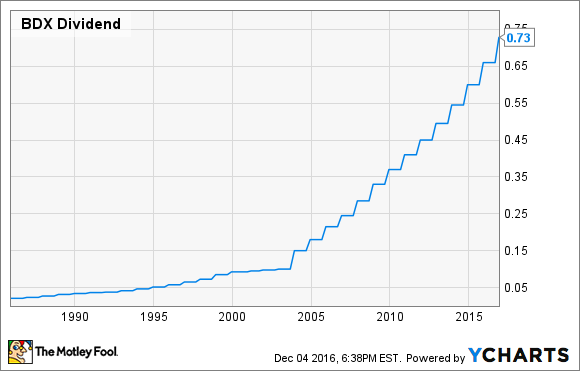 Becton Dickinson operates in a highly competitive field, but it's set itself apart by focusing on single-use products such as syringes. It's also bulked up over the years with acquisitions. All told, for fiscal 2016 the company managed to grow its top line an impressive 21% over 2015's result, to almost $12.5 billion. Net income rose even more sharply, by 40%, to $976 million.

That performance helped add to the cash pile. Becton Dickinson's operating and free cash flow figures saw dramatic improvements, with the latter growing by a mighty 65%, to just under $1.9 billion. Given that the company doesn't sacrifice much of its FCF for dividends to begin with, and this latest raise is well below that growth rate, we can assume the raised dividend is safe for now, and will probably be hiked again next year.

Becton Dickinson's new dividend is to be paid on Dec. 30 to investors of record as of Dec. 9. It yields a theoretical 1.8% on the current stock price.

The highest raiser of our trio is Jack in the Box (NASDAQ:JACK), with a 33% boost in its quarterly distribution to $0.40 per share.

That announcement was made concurrently with the company's Q4 and fiscal 2016 results, which disappointed some investors. This reaction came despite a 39% year-over-year hop in net profit, to $32 million, for the quarter and a 13% improvement in revenue, to almost $400 million. But the market was concerned that same-store sales rose by less than 1%, well below the expected 1.6%.

Meanwhile, Jack in the Box's free cash flow was affected by acquisition activity during the quarter, specifically the almost $20 million the company spent to buy franchised restaurants and bring them back into the corporate fold. The company also runs a very active share buyback program, with almost $410 million in authorization coming into the new fiscal year. 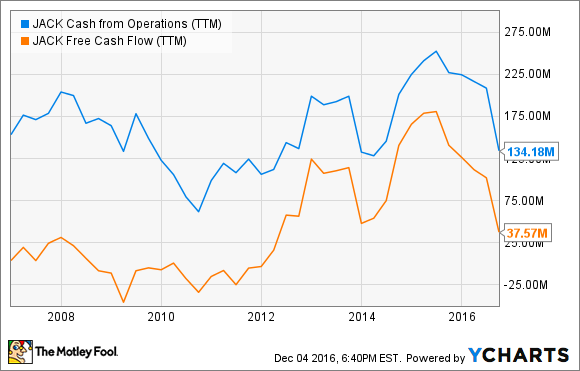 Regardless, the company's dividend is clearly a priority, given the size of the raise (and its relative novelty -- it was initiated in mid-2014). I'd imagine the fast-food chain will find a way to at least maintain that bulked-up payout.

Jack in the Box will hand out its next dividend on Dec. 16 to stockholders of record as of Dec. 5. The payout would yield 1.5% at the most recent closing share price.