The Financial Sector ETF (NYSEMKT:XLF) continued its month-long rally by gaining another 1%. Meanwhile, a spike in natural gas prices produced a rough session for the bearish VelocityShares 3x Inv Natural Gas ETN (NYSEMKT:DGAZ), which slumped by 11%

Lululemon spiked 15% after the yoga apparel retailer delivered impressive revenue and profitability gains for its fiscal third-quarter. Comparable-store sales growth improved to a 4% pace from 3% in the prior quarter even as gross profit margin expanded to 51% of sales.

These figures suggest CEO Laurent Potdevin was right three months ago when he predicted that Lululemon's recovery was finally gaining steam. The back-to-back gross margin increases, for example, mark the first real improvement in that metric in four years. 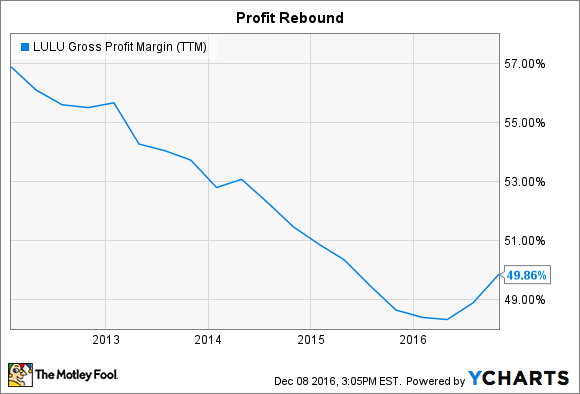 Potdevin sounded a similarly optimistic tone for the quarter that just closed. "Our third-quarter results demonstrated strong execution across all areas of our business as we delivered continued top-line momentum, outperformed in gross margin and inflected meaningfully in EPS," he said in a press release.

As for the all-important holiday season quarter, management noted mixed results over the first few weeks that have since improved. As a result, the retailer expects to hit the roughly $2.3 billion of revenue it had earlier forecast for the full year. Earnings targets were upgraded, though, to as much as $2.23 per share. The holiday season is still likely to be fiercely competitive, but Lululemon appears to be hitting its stride at just the right time.

Costco shares rose by as much as 5% before settling to a 3% gain on the day. The volatility came in the wake of quarterly earnings results that, while missing consensus estimates, contained evidence of improving operating trends.

Comparable-store sales ticked up by 2% to mark a slight slowdown from the prior quarter's 3% comp. However, most of that decline could be tied to price deflation and not falling customer traffic. In fact, executives said shopper traffic appeared to stabilize after several consecutive quarters of declines. The warehouse retailer didn't see anything like the 4% gains that it had consistently booked until last year — but trends aren't worsening, either. "We're clearly merchandising and selling from a position of competitive strength," Chief Financial Officer Richard Galanti told investors in a conference call.

Membership renewal rates also stabilized in the wake of the co-branded credit card switch that disrupted new member signups. Costco management said a similar switch the company went through in Canada required a few quarters before membership rates rebounded back to normal. They see the same general trend playing out for the U.S. market now.

Meanwhile, the credit card switch, just a quarter old, is already affecting its business is several positive ways, namely significantly boosting profitability. It's still early to judge the long-run impact, but so far the switch over is surpassing management's expectations in terms of the savings it is generating, thus giving the company more room to maintain its competitive status with some of the lowest prices in the retailing industry.