Early next month, microprocessor giant Intel (NASDAQ:INTC) is expected to launch its seventh-generation Core processors for desktop personal computers, code-named Kaby Lake. The highest end of the Kaby Lake models will be a chip known as the Core i7 7700K, which will be targeted at personal-computer enthusiasts and gamers.

The enthusiast/gaming market, though a relatively small portion of Intel's overall business, is growing. It's also a market that Intel has previously said it wants to increase its focus on.

Website HardOCP, a respected technology review site, managed to get a hold of a pre-release sample of the 7700K and ran it through the wringer. The test results essentially showed the following:

In other words, it's exactly what Intel promised: higher performance because of an improved manufacturing technology process.

The site, however, had this to say about the part:

With Kaby Lake, Intel has just given a big middle finger to its fan base, loyalists, and every hardware enthusiast in the world. Intel has just told us we do not matter to its corporate structure anymore. To the enthusiast, Kaby Lake in its Core i7-7700K form is nothing more than what [Francois Piednoel, Intel's principal engineer] promise[d] two years ago. I would not spend my money on Kaby Lake simply in protest.

Why is the reviewer so disappointed with this part? It comes down to the fact that although Kaby Lake runs at higher frequencies, it doesn't deliver more performance per clock cycle than the prior-generation Skylake.

"As you know we like to look at IPC (instructions per clock) when a new processor releases as we know most of our readers never intend to run these CPUs at their stock speeds," the introduction of HardOCP's review read.

Although I can understand the reviewer's viewpoint, I think a closer examination of the recent history of Intel's gaming/enthusiast processor architectures shows that from a total delivered performance perspective, the 7700K doesn’t represent anything out of the ordinary for a next-generation enthusiast desktop chip.

In the following table, I include Intel's mainstream K-series chips released from early 2011 to what Intel will launch in January. These chips are all quad-core processors with simultaneous multi-threading, a technique that allows a single core to be viewed as two to improve a core's resource utilization. 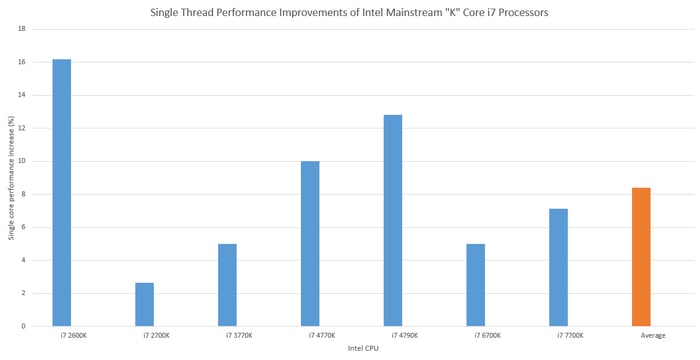 The data reveals some interesting information. The average single-core performance increase generation over generation among Intel's mainstream K-series Core i7 chips is 8.39%. The Core i7 7700K, even though it's based on the same architecture as the 6700K, appears to deliver a bigger performance improvement over the 6700K than the 6700K did over the prior 4790K, though both are below average generational jumps.

The main improvement, according to the leaks, will be a move from four cores to six processor cores. Further manufacturing technology refinements might allow Intel to push the peak single-core frequency up a little bit more, perhaps to 4.6GHz, but I don't expect a big push on that metric.

It'll be interesting to see if consumer software, such as 3D games, begins to take better advantage of more cores beginning in 2018, as Intel begins to rely on increased core counts for more performance.

The next significant jump in per-core performance for the mainstream Core i7 processors should come in early 2019, and then Intel is likely to launch processors based on its new Ice Lake architecture.