It's painful for shareholders when M&A hopes die.

Depomed (ASRT -0.25%) is down more than 10% at 2:46 p.m. EST after Mark Timney, the CEO of privately held Purdue Pharma, said his company wasn't looking to buy the fellow drugmaker.

There was no hemming or hawing in Timney's statement to Bloomberg Technology. "If you ask me outright if we are looking at Depomed as an acquisition, I'll tell you no," he told the media outlet.

In October, Depomed was up more than 40% for the year as investors hoped that the company would be put up for sale, an idea championed by activist hedge fund Starboard Value, which had purchased a  9.8% stake in  the company. Instead, Depomed gave Starboard Value three board seats to keep the hedge fund from attempting to take over the company completely, which decreased the likelihood of a forced sale.

A disappointing third-quarter earnings report last month furthered the shares' decline. Today's, news might not justify a double-digit drop, but it's not a surprising reaction from what-have-you-done-for-me-lately investors. 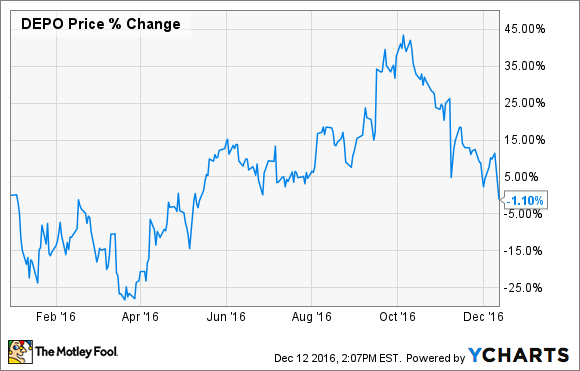 Depomed's portfolio of pain medications would certainly be in Purdue's wheelhouse, but its lack of interest doesn't necessarily mean that Depomed won't eventually be acquired. Mallinckrodt (MNK) and Daiichi Sankyo have both been rumored to be interested in making bids for Depomed.

Mallinckrodt seems like a good fit, but Depomed would be an awfully large acquisition for the specialty pharma, which would likely require some or all of a potential acquisition to be paid for with Mallinckrodt's stock. Japan-based Daiichi Sankyo has a couple of pain medications in its pipeline, including CL-108, which is under review by the FDA, so the acquisition of already-approved pain medications that could be sold by the same sales force makes a lot of sense.

Of course, investing in a company simply in the hopes that it'll be acquired is usually ill advised. And at the knocked-down price, Starboard Value and the rest of the board might be less interested in selling.

Brian Orelli has no position in any stocks mentioned. The Motley Fool has no position in any of the stocks mentioned. Try any of our Foolish newsletter services free for 30 days. We Fools may not all hold the same opinions, but we all believe that considering a diverse range of insights makes us better investors. The Motley Fool has a disclosure policy.