FedEx Corporation (NYSE:FDX) stock was down a few percentage points after the company released its fiscal second-quarter results. In short, investors appear to be fretting over margin contraction in the quarter, caused by increased investment in the ground segment to prepare for e-commerce growth. That said, let's take a closer look at what went on by looking at five key takeaways from the earnings call.

Given that earnings were released on the 20th of December, it's a perfect opportunity for management to outline performance during peak delivery season. Although key rival United Parcel Service (NYSE:UPS) has borne the brunt of the difficulties in previous years, there is no telling exactly how peak demand days will pan out in any given Christmas holiday for either company.

Fortunately, FedEx's CEO Fred Smith had positive things to say: "[W]ith the exception of several local weather issues, our service levels have been outstanding." Moreover, Smith went on to outline how FedEx's traffic mix "is a bit different by design" due to the company's "commitment to continue to grow earnings."

The latter is a sign that FedEx is achieving its aim of influencing customer delivery patterns during the peak delivery season, and in doing so is helping FedEx optimize profitability. UPS is trying to do a similar thing.

Ground segment takes a hit, but will improve

Naturally, analysts asked questions on that topic. Smith allayed their fears on the possibility of ongoing margin contraction in three ways:

Customers across all segments

On almost every earnings call, FedEx's management stresses that the company isn't run with one quarter's margin in mind, and certainly not with one segment's margin in mind. In other words, the business is run with a strategic mindset. In this regard, Smith's declaration that 92% of revenue in the U.S. comes from customers who use both express and ground services was particularly insightful.

It suggested that it isn't feasible for FedEx to avoid investing in one segment or the other in order to massage margin in the future -- a holistic approach is necessary, and investors should understand the extra investment in the ground segment in this context.

Express will have a good year

With nearly all the analyst emphasis on ground margin, it was easy to forget that the express segment was responsible for slightly more than 50% of segment operating income in the quarter. Indeed, a quick look at express segment volumes reveals a decline in the U.S. in the second quarter. 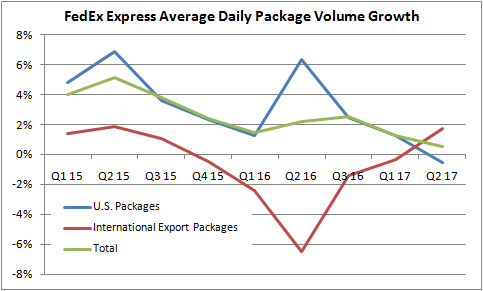 CEO of FedEx Express David Bronczek claimed it was down due to Hurricane Matthew and a typhoon that hit the west coast, and Smith argued that a single customer decided to move volume out of the peak quarter, while CFO Alan Graf suggested analysts would be "pleased" by how the express segment will finish the year -- something to look out for.

Finally, Graf claimed the TNT Express integration "continues to proceed as planned," with $750 million in annual pre-tax synergies expected to be achieved in 2020, having spent a total of $500 million in capital expenditures on TNT in total, with $100 million in fiscal 2017. The total program expense is expected to be in the range of $700 million to $800 million over the next four years.

Integrating TNT Express is a key part of FedEx's 2017, and it's good news that plans remain on track.

All told, the margin hit in the quarter seems to have hit the stock price in the near-term, but it will all be forgotten if volumes flow through as planned in the ground segment. Management expects margin expansion in ground in fiscal 2017, and implied that express volumes will improve going forward.

If FedEx can achieve these aims while undergoing a stress-free integration of TNT Express, then 2017 is set to be a good year for the package delivery giant.