While many restaurant chains proved resilient in a market where growth proved hard and the total number of people eating out declined, two fast casual chains were not able to keep pace.

The first company, Chipotle (NYSE:CMG), suffered due to its high-profile food safety scandal and a customer base that has been very slow to forgive. The second, Noodles & Company (NASDAQ:NDLS), simply saw itself get lost among the competition, suffering not because customers chose to eat at different restaurants, but because in many cases potential customers chose not to eat out.

Both Chipotle and Noodles & Company saw major drops in their share price in 2016. Going forward into the new year, both also have big plans to turn things around. 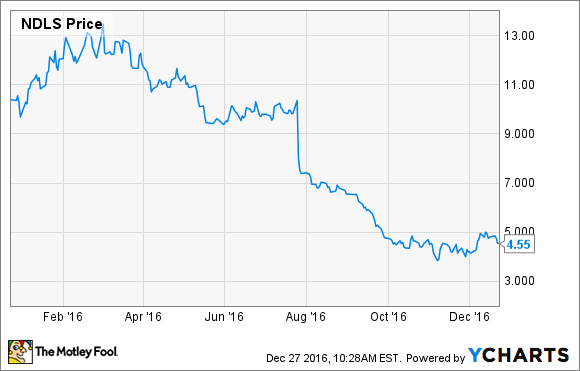 What went wrong at Noodles & Company?

As you can see from the chart above, Noodles & Company had a rough year. Its shares opened the year at $9.61 and closed on Dec. 23 at $4.55, a 52% drop in value. The company also abruptly lost its longtime CEO in July when Kevin Reddy stepped down.

The chain has been losing money as well reporting steady losses all year, including a $9.8 million shortfall in Q3, the most recent quarter it has reported on. That number is actually flat from the third quarter in 2015, so at least the loss has stabilized. Interim CEO and CFO Dave Boennighausen believes the pieces are in place for a turnaround.

"Despite the results of the third quarter, I am convinced that we are making important progress, implementing strategies to increase operational consistency, enhance our menu, and improve our profitability," Boennighausen said. "While the opportunity for substantial improvement in our financial performance will take time, we are seeing steady progress in our top-line results and are positioning the company to improve long-term shareholder value." 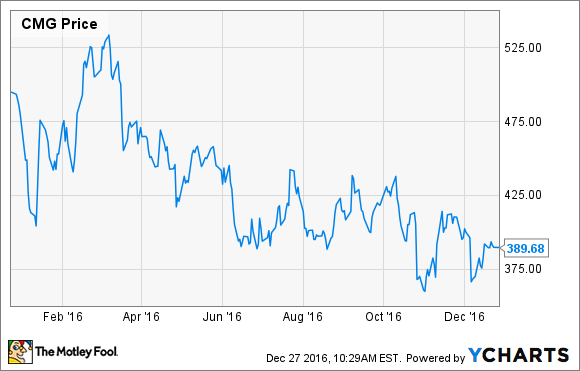 Chipotle had a lousy year

Despite all of those red numbers, CEO Steve Ells sees a better year ahead.

"We continued to make steady progress in our sales recovery during the third quarter," Ells said. "We are earning back our customers' trust, and our research demonstrates that people are feeling better about our brand, and the quality of our food."

Ells, who became the company's sole leader in mid-December after co-CEO Monty Moran stepped down said 2016 was "a year of reinvestment," and noted that he expects "to further recover sales and improve our economic model to create long-term shareholder value" going forward.

Both Chipotle and Noodles & Company are likely happy to see 2016 end. Any year in which you underperform and lose a CEO counts as one you're counting the days until the end of.

Both companies have different paths back to success. The noodle chain needs to find a clear identity in a crowded market. Chipotle, on the other hand, needs to simply convince people that its problems are behind it. Neither one has an easy road, but both have shown some small steps toward making 2017 a better year.