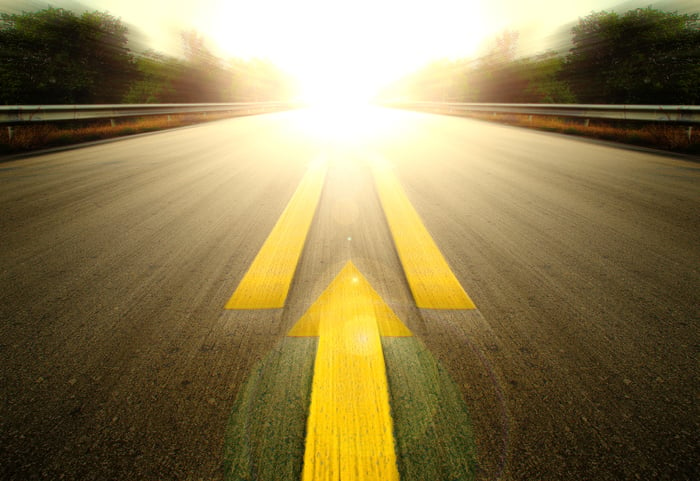 Amazon.com (NASDAQ:AMZN) is one of the greatest success stories in business history. The company has come to dominate the retail industry and is rapidly disrupting many other areas of the global economy.

Yet with its stock up several hundred times in value since its 1997 IPO, you'd be excused for thinking Amazon's days of turbocharged growth are long gone. There are, however, multiple signals that tremendous gains still lie ahead for the e-commerce titan. Here are seven of the most compelling signs that Amazon's best days may still be ahead.

1. The staggering growth of e-commerce

Even after two decades of torrid growth, the rise of e-commerce is still in its early innings. Online sales comprise less than 10% of all U.S. retail sales, and research firm eMarketer estimates that retail e-commerce sales will increase to more than $4 trillion in 2020, up from about $1.5 trillion in 2015. With tens of millions of new people gaining access to the internet every year, e-commerce appears set to keep growing at a rapid pace for at least another decade, and likely much longer. Amazon stands to benefit from this megatrend, perhaps more than any other company.

There's a reason Alphabet (NASDAQ:GOOG) (NASDAQ:GOOGL) subsidiary Google describes Amazon as its No. 1 competitor: A steadily increasing number of online shoppers start their searches on Amazon.com. In fact, a recent report by marketing firm BloomReach shows that 55% of consumers begin their searches on the retail juggernaut's website when shopping online, up from 44% in 2015. During that time, the percentage of customers who began their product hunts on search engines declined to 28% from 34%. And the share of shoppers whose searches originated at all other retailers' sites combined fell from 21% to only 16%. That's a powerful trend, and a testament to Amazon's large and increasing prominence in the minds of consumers.

One of the main drivers of Amazon's increasing mindshare among online shoppers is its Fulfilled By Amazon program. The FBA program lets third-party merchants use Amazon's online marketplace and distribution infrastructure to sell their goods. This greatly expands the number of product listings available on Amazon.com, thereby offering more value to consumers. And as more people come to Amazon for their online shopping needs, more product creators and merchants flock to Amazon's FBA platform to sell their wares. This virtuous cycle helps to create powerful network effects for Amazon, whereby each additional consumer and merchant that joins the platform creates more value for existing members of the network -- a cycle that should only continue to grow stronger in the years ahead.

4. The rise of Prime

Another powerful driver of Amazon's success is its Prime membership program. Research firm Consumer Intelligence Research Partners estimates that the average Prime customer spends $1,200 per year on Amazon, compared to about $600 for non-Prime customers. And while management has yet to disclose the number of Amazon Prime subscribers, CIRP estimates that the number of U.S. Prime members surged 38% year over year to 65 million in the third quarter. With Amazon investing heavily to expand Prime's content and service offerings, it should continue to enjoy rising Prime adoption, which, in turn, should fuel further increases in sales and profit.

The magnitude of Amazon's dominance may be best reflected in the misfortunes of its rivals. The business graveyard is littered with brick-and-mortar retailers that could not withstand the Amazon-led onslaught of e-commerce. Recent examples include RadioShack and Sports Authority, and many analysts believe venerable Sears Holdings may soon join the ranks of the deceased. Perhaps most telling of all are the recent stock price swoons among even some of the most respected traditional retailers. 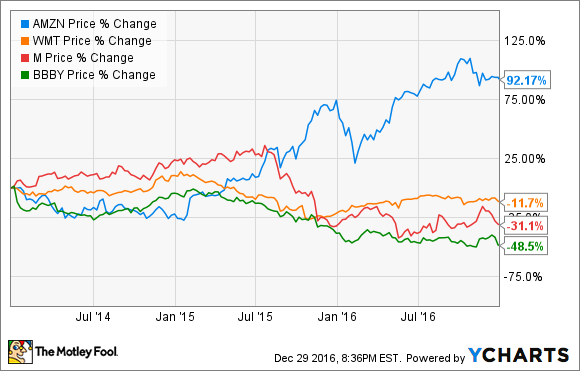 The message is clear: In a world dominated by Amazon, many other retailers are in a struggle for survival. And as its competitors fade away, Amazon stands to claim the spoils.

Incredibly, Amazon has another business that may prove to be even more valuable than its core online retail operations. Amazon Web Services has quickly become the dominant provider of scalable cloud computing services, with an estimated 31% share of the global cloud infrastructure market, according to Synergy Research Group. AWS has a massive market opportunity -- so large, in fact, that Amazon's management believes it could eventually rival the company's retail operations in size.  The business is already making progress in that regard, with AWS' revenue surging 55% year over year to $3.2 billion in the third quarter. AWS is also highly profitable, with Q3 operating margins of more than 26%. Best of all, AWS has just barely scratched the surface of its potential, and it should continue to turbocharge Amazon's revenue and earnings growth for many years to come.

Most businesses can only dream of having growth drivers as powerful as AWS and Amazon's online retail operations. Yet even with these potent catalysts well in tow, CEO Jeff Bezos refuses to allow the company he founded to rest on its laurels. Instead, he tenaciously demands that Amazon continue to push the envelope. This focus on innovation has Amazon well positioned to disrupt multiple sectors, such as groceries, home automation, and even package delivery via its drone initiative.

Entrance into these massive industries expands Amazon's total addressable market opportunity by hundreds of billions of dollars. And as Amazon has proven time and again, when it enters a new market, it is not to be taken lightly. As Bezos' juggernaut relentlessly expands its beachheads in these areas in the coming years, Amazon should continue to reward its investors with market-crushing gains.