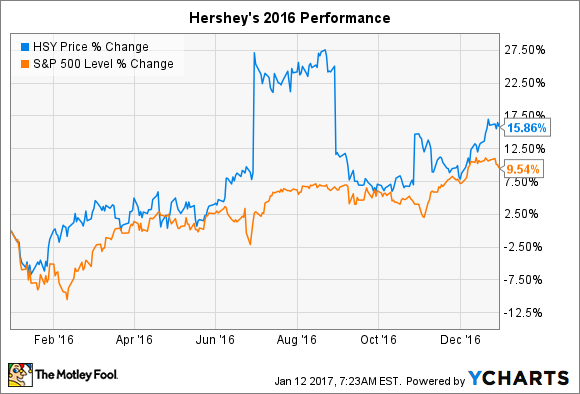 The stock had been higher by nearly 30% at one point in the year following a buyout offer from global snacks giant Mondelez (NASDAQ: MDLZ). As hopes for the unsolicited acquisition dwindled, though, Hershey's stock settled back.

Hershey saw weak but steady sales gains last year. A sharp drop in the first quarter gave way to more solid demand in the second and third quarters. However, sluggish market conditions and rising competition in the candy segment forced Hershey to lower its full-year revenue outlook to 1% from the 1.5% that CEO John Bilbrey and his executive team had initially projected.

Its final quarterly announcement of the year didn't give investors much to celebrate, however. Sales growth fell in the key U.S. market to below 2% from 3.5% in the prior quarter. The expansion pace also declined internationally, falling to 7.5% from 13%.

Hershey's estimated 1% annual sales increase should deliver earnings growth of about 5% for the full year, and continued expense discipline will likely make that expansion pace easy to maintain even in a slow-growing industry. But the company hopes that innovation like the recently released Cookie Layer Crunch Bar will fuel a return to more substantial sales growth.

Meanwhile, the stock is valued at a hefty premium of over 3 times sales, compared to around 2.5 times for comparable rivals. That's one more reason why investors shouldn't bet on an acquisition moving shares higher, but instead keep their focus on whether Hershey is succeeding at speeding up its organic growth pace in 2017.