It wasn't a good year for uranium in 2016. Investors had to suffer through continued commodity price weakness even though the long-term backdrop for uranium and nuclear power remained relatively strong. Indeed, it took an iron stomach to buy a uranium miner like Cameco Corp. (NYSE:CCJ), which was easily the best uranium stock of 2016. Here's why, despite the tough year, Cameco Corp. was top of the heap last year and why it's a good option for 2017, too.

The first thing to point out is that Cameco isn't the only option for investing in uranium. But it might as well be. Mining giant Rio Tinto (NYSE:RIO) counts uranium among the many products it digs out of the ground. But the nuclear fuel only accounts for around 1% of revenues, and even less on the bottom line. The biggest driver at Rio Tinto is iron ore, which is nearly 40% of the top line and just about 60% of EBITDA.

At the other end of the spectrum are companies like Energy Fuels (NYSEMKT:UUUU) and Uranium Energy Corp. (NYSEMKT:UEC). They are pure plays on uranium, but they are penny stocks with market caps that hover around $100 million or so. They'll certainly get you exposure to uranium, but with a huge amount of investing risk. Both have been bleeding red ink for years.

And then there's Cameco. It's a pure play on the nuclear power market. And it's a large and established uranium miner with a market cap of around $4 billion. It's really the best way to get direct exposure to the nuclear fuel for most investors. However, size and focus alone don't make it the best uranium stock of 2016.

Adjusting to the times

What makes Cameco stand out is how hard it's worked to deal with the difficult uranium market. Uranium prices have been weak since the 2011 Fukushima disaster in Japan. The aftermath of that event, which included Japan shutting all of its nuclear power plants, left both a supply/demand imbalance and a negative sentiment lingering over the uranium market. 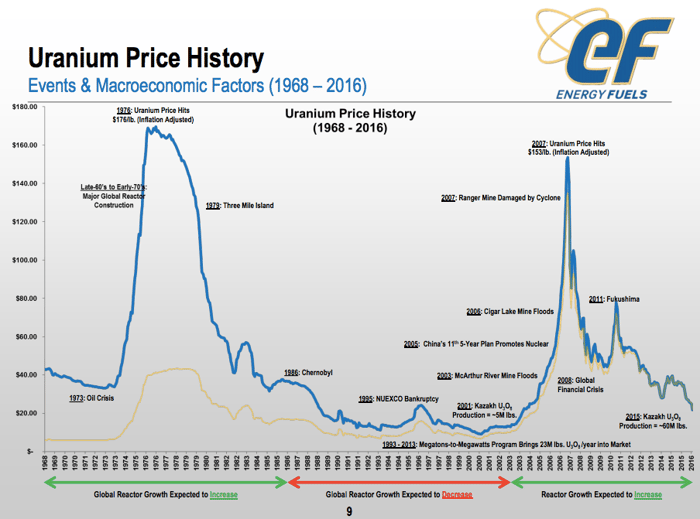 In response, Cameco, like so many other miners dealing with weak prices, has been cutting costs. For example, it started 2016 with capital spending plans of $320 million. But by the third quarter, industry dynamics led the company to rein that in to just $245 million. That's the right move in a tough market.

The miner has also been working hard on the cost frontby replacing higher cost production from its declining assets with increased production from its Cigar Lake project. This low-cost mine helped Cameco lower its cash costs for mining uranium by around 23% through the first nine months of 2016. And while it paid 4% more over that span to acquire uranium from others for resale, it bought 33% less uranium from outsiders. All in, the company's costs for produced and purchased uranium fell 11%.

Meanwhile Cameco's long-term contracts provided material protection from weak spot prices in the uranium market. To put some numbers on that, the average spot price in the third quarter was around $24.50 a pound. Cameco's realized price, however, was around $43 a pound. The company's conservative business plan is holding up to a major stress test.

It's also worth noting here that debt is still a relatively modest 20% or so of the capital structure. And that Cameco has remained profitable throughout the downturn, unlike smaller pure plays like Uranium Energy and Energy Fuels. To be fair, Cameco has been burning cash. Its cash balance dropped 50% through the first nine months of 2016. But part of that cash burn has been spending on projects like Cigar Lake that have helped Cameco adjust to the hard times it's currently facing. A tough but important business decision.

There's many reasons to like the long-term future of uranium. That includes the fact that there are over 50 new reactors currently in construction today, mostly in developing countries with a growing demand for power. Unfortunately, a rosy outlook doesn't make the current uranium downturn any easier to live through.

So while part of the reason Cameco gets the nod for the top uranium stock in 2016 is because it is the largest pure-play option, it has also been doing the right things to deal with the downturn. That includes cutting costs, investing where it will benefit the company and shareholders most, maintaining a conservative financial structure, and, all in, keeping its head above water. If you are looking to invest in uranium, you'll want to put Cameco on your short list.