Swiss pharmaceutical giant Roche (OTC:RHHB.Y) has been profitable for years, but incoming competition for its leading products could make growth difficult to come by in the years ahead. Clinical-stage vaccine specialist Novavax, Inc. (NASDAQ:NVAX) suffered one of the worst biotech beatdowns of 2016, but a win for its lead candidate in an ongoing late-stage trial could lead to market-crushing gains.

Should investors take a chance with a risky little biotech that's still bleeding money, or play it safe with a company that's been profitable for years, but might face a slowdown going forward? Let's examine bull and bear arguments for each stock to see which is the better pick right now.

The good news for investors considering a Novavax purchase is twofold. First, the stock lost so much of its value last year that positive data for its lead candidate could lead to a huge jump from recent prices. Also, the company's lead candidate, a respiratory syncytial virus vaccine (RSV F), is currently in a late-stage trial that could support an application for prevention against infection of infants through the first year of their lives via maternal immunization.

The virus is the leading cause of infant hospitalizations in the U.S. and second only to malaria worldwide as a cause of infant mortality. An approval and successful launch for the RSV F vaccine as a maternal immunization could lead to annual sales well over $1 billion. At a recent market cap around $368.9 million, this biotech stock would have plenty of room to run upwards if results from the study point toward success.

The bad news for Novavax shareholders, though, is daunting. The RSV F vaccine barely squeaked out a significantly lower infection rate against a placebo during a 1,600-patient mid-stage study with older adults. Later, it failed to repeat the success in a much larger study, and the stock was savagely beaten.

There's a chance a relatively low RSV attack rate across all patients in the study led to the failure, and the company intends to explore a two-dose regimen with a small study in older adults later this year. For now, there's little to look for except the ongoing 8,618-patient maternal immunization study that won't have data for years. In the meantime, the company is burning through cash reserves and will probably need to raise funds with another value-diluting share offering to keep the trial running through completion.

With very little in its clinical-stage pipeline to fall back on and limited resources to develop another candidate, Novavax has all of its chips on the maternal immunization study. If the RSV F vaccine fails again, this beaten-up biotech stock could fall much further.

Perhaps it's best to begin looking at the bad news for the biopharmaceutical and diagnostics giant. First of all, with about $50 billion in annual sales, there's practically zero chance Roche can provide the sort of upside over the next few years that Novavax might be able to pull off.

Most analysts expect Roche to achieve annual earnings growth of about 7.3% over the next five years. You can expect that figure to remain in flux as incoming competition for aging cancer therapies pulls the top line down while exciting new drug launches push it up.

Sagging sales of top products Herceptin, Avastin, and Rituxan slowed the growth of the company's entire pharmaceutical segment to just 4% at constant exchange rates during the first nine months of 2016 compared to the previous-year period. Luckily, recently launched cancer therapy Tecentriq is on its way toward peak annual sales estimates topping $3 billion.

Tecentriq, the first-in-class inhibitor of an immune system shut-off switch that many types of tumor cells use to evade attack, is already approved for common types of lung and bladder cancer. Another 29 clinical trials testing Tecentriq's potential in combination with other therapies could expand its usage much further. 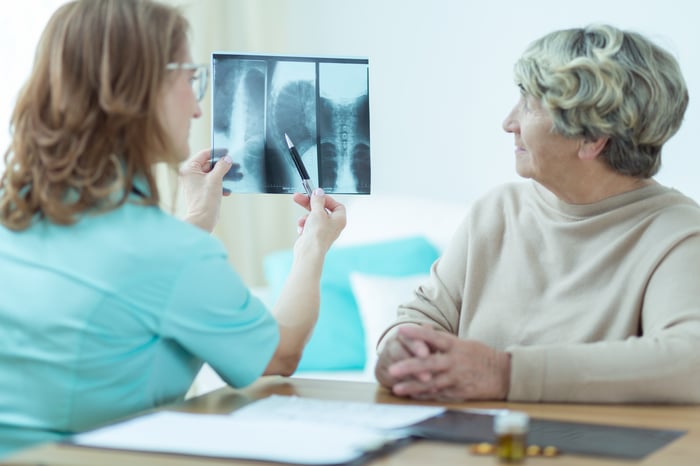 Tecentriq is one of an industry-leading 14 Roche candidates to earn a breakthrough-therapy designation. In my eyes, one of the most exciting drug candidates is awaiting a decision that could make it the first disease-slowing therapy for primary progressive multiple sclerosis (MS). Ocrevus is the first drug to significantly slow progression for about 15% of MS patients with the most aggressive form of the disease. If approved, it could generate peak annual sales topping out at around $5 billion.

Following its stock market thrashing, Novavax could provide some tremendous upside. Unfortunately, the slim margin by which its only late clinical-stage asset succeeded in a mid-stage study, followed by a disappointing failure in the larger late-stage study, doesn't bode well for its overall chances of success.

Roche doesn't have as much upside potential, but there's far less chance of investors suffering heavy losses over the long term. In fact, the company pays a dividend that it has managed to increase for 31 consecutive years.

Roche's prospects for at least modest growth in the years ahead are as close to a sure thing as you can hope for with a pharmaceutical stock. That alone is enough to make it the better stock to buy now.