Shares of Vertex Pharmaceuticals Incorporated (NASDAQ:VRTX), a biopharmaceutical company with a leading role in cystic fibrosis treatment, sank 42.5% last year, according to data from S&P Global Market Intelligence. Although the company has narrowed its losses, investors didn't appreciate another year in the red. An apparent slowdown for its only commercial-stage drugs didn't sit well with the market. 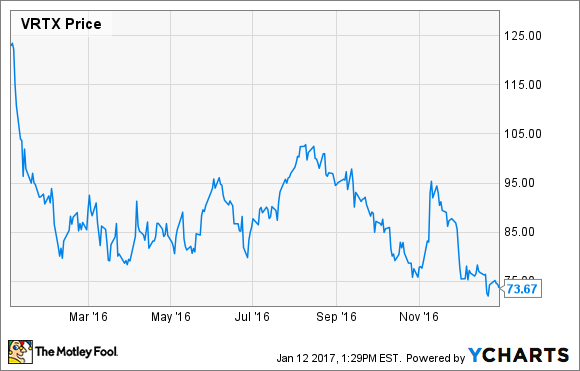 Although its cystic fibrosis drug launches have been successful, Vertex Pharmaceuticals is walking a tightrope that seems to get higher and higher. In the first nine months of 2016, revenue more than doubled over the prior-year period to $1.24 billion. Unfortunately, operating expenses (including an $802 million research and development outlay) outpaced revenue by about $32.7 million during the period.

This is the only company I can think of that saw its top line rise this quickly into nine figures only to suffer a sinking stock price. At the heart of the matter is the slowing of sales growth for its cystic fibrosis products, Kalydeco and Orkambi. There are literally thousands of genetic mutations responsible for cystic fibrosis, and Vertex's therapies are approved to address a limited array of them. Third-quarter sales that rose just 5.8% over the year-ago period suggest Kalydeco is getting near a saturation point.

Kalydeco-based combination Orkambi launched in the U.S. in mid-2015, and its sales grew 78.9% in the third quarter, compared to its first quarter on pharmacy shelves a year prior. The stock trades at about 12 times sales at recent prices, which is still a fairly high valuation for a highly focused biotech skirting the edge of profitability.

The stock trades at about 12 times sales at recent prices, which is still a fairly high valuation for a highly focused biotech skirting the edge of profitability.

It's important to remember that Vertex is miles ahead of its competitors in the limited but underserved cystic fibrosis space. Near the end of the third quarter, Orkambi earned approval to treat children ages six through 11 in the U.S., and a similar expansion is under review in the European Union. The expansion should give the combination treatment more room to grow, albeit not at the explosive pace it enjoyed at its launch.

Recently, Vertex estimated about 9,000 patients have started treatment with Orkambi, and that number could grow to 25,000. While new drug launches in the U.S. are generally swift, the eurozone presents a special challenge as reimbursement terms must be negotiated with each country. It didn't hammer out an agreement with Germany until December, and product sales outside the U.S. will probably continue rising steadily as more negotiations conclude throughout the year.

Beyond Kalydeco and Orkambi, Vertex has several good reasons to expect sales to outpace expenses in 2017. In the second half, investors will want to keep an eye out for late-stage data from three mid-stage clinical trials that involve triple-combination regimens. If successful, they could reignite the stock. With plenty of data to look forward to and a chance to reach sustainable positive cash flows, Vertex could be the comeback biotech stock of the year.