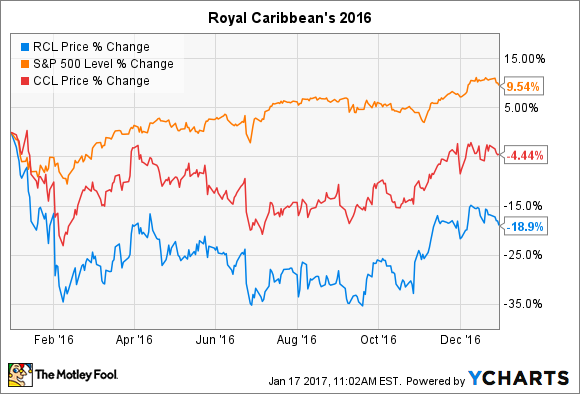 The stock plunged by as much as 35% early in the year and only recovered some of those losses to end the year significantly behind the broader market and its 10% rise. Rival Carnival (NYSE:CCL) also lost to the market last year, but by a smaller margin.

A few worrying trends combined to push investor sentiment lower on Royal Caribbean's business. The biggest of these was a slowdown in vacation demand in key markets like Latin America, the Mediterranean, and Australia, but Wall Street early in the year also braced for profit bites from foreign currency swings and rising interest rates.

These factors did hurt the business in 2016, with rising fuel costs and a stronger dollar pinching earnings by $0.27 per share. Royal Caribbean also had to take a painful $400 million charge as it wound down its business in Latin America as economic growth stalled in the region.

Yet strong gains in its North American business kept the company's booked position about equal to 2015's record high, which is even more impressive when you consider that prices are climbing, too. Net yields are projected to rise 4% for the full year, compared to a 4.1% bounce for Carnival.

Both cruise ship operators are forecasting strong demand for the coming year thanks to record bookings and increasing cruise prices. The companies aren't likely to benefit from unusually low fuel prices in 2017 as they did early last year, though, and that trend should slow profit growth.

Still, Royal Caribbean is expected to earn at least $6.78 per share in 2017 to roughly double its 2014 haul. That expected profit bounce gives the stock a valuation of just 12 times next year's estimated earnings, which could protect investors from further big share price declines in 2017.