Kinder Morgan (NYSE:KMI) reported its fourth-quarter and full-year results after the closing bell on Wednesday. The energy infrastructure giant produced $1.147 billion of distributable cash flow for the quarter, pushing its full-year total to $4.511 billion. While both of those numbers were down year over year, they were right in line with the company's revised full-year guidance. 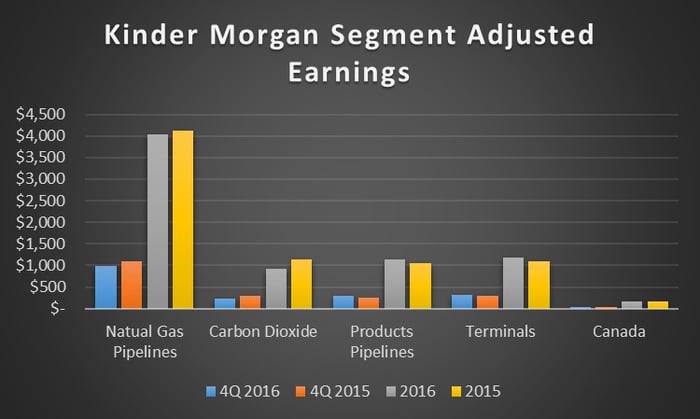 We are pleased with our operational performance for the quarter, which contributed to full-year 2016 results that were in line with our guidance provided since April. We generated full-year 2016 distributable cash flow in excess of our dividends and growth capital expenditures and did not access the capital markets to fund growth projects. We continue to demonstrate the resiliency of our cash flows, generated by our large, diversified portfolio of predominately fee-based assets. We generated earnings per common share for the quarter of $0.08 and distributable cash flow of $0.51 per common share, resulting in $867 million of excess distributable cash flow above our dividend.

Kinder Morgan's fourth-quarter and full-year results reflect the overall stability of its business. While weaker volumes and asset sales caused results to fall year over year, the company still managed to generate a tremendous amount of cash flow.

While the company used some of that cash flow to fund its dividend, the bulk went to finance growth projects. These investments enabled the company to complete its Southern Natural Gas pipeline and Elba Express Company expansions, the South System Flexibility project, the Cortez pipeline expansion, and the construction of the American Endurance tanker last quarter. Further, it completed these and other projects and funded capital toward future project completions while living within cash flow, which enabled the company to push its leverage lower. Overall, debt to adjusted EBITDA fell from 5.6 at the end of 2015 to 5.3 at the end of last year.

Kinder Morgan still has about $12 billion of expansion projects in its backlog, including $3.2 billion of capital spending this year. As with last year, the company intends to finance that capex with internally generated cash flow, which should be about $4.46 billion. After paying $1.1 billion in dividends, the company should have more than $100 million in cash left over, assuming no more joint ventures, project cancellations, or improvements in oil prices.